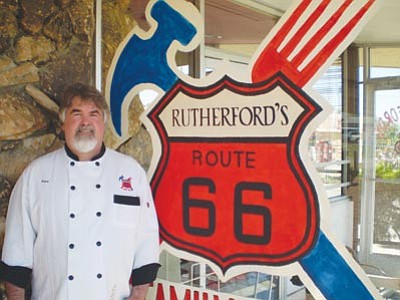 Owner Brent Rutherford is still working on a new sign for what used to be the Silver Spoon Family Restaurant on Andy Devine Avenue. (HUBBLE RAY SMITH/Miner)

It hasn't been easy getting the sign changed, owner Brent Rutherford said. He had two electrical contractors come by to look at it and one never called back. So far he's spent about $2,800 refurbishing the sign and he wants to add a small digital screen to advertise daily specials.

Unfortunately, the sign will remain dark when the International Route 66 Festival rolls into Kingman next weekend. About 3,000 to 5,000 people are expected to attend.

Rutherford's Route 66 restaurant logo is hand-painted on the window, but it's hard to see from the highway. A couple of tourists walked in while having their car repaired and said they couldn't tell if the place was open.

Rutherford had just heard about the Route 66 festival coming to Kingman when he bought the 3,500-square-foot restaurant for $175,000 last year. He gets about 20 tourists a day stopping into his restaurant, a lot of them from the Grand Canyon.

"The first problem was to get someone to do the sign," the 43-year-old restaurateur said Tuesday in a corner booth where he conducts his business. "It's just a matter of changing out the face, but it's a pretty good size sign."

Rutherford had been looking for a new location after the lease expired on his restaurant in Bullhead City and the landlord elected not to renew it. He likes Kingman because it's the heart of Mohave County.

Lake Havasu City may have more income per capita, but Kingman is centrally located along Interstate 40, making it easier for product distribution, Rutherford noted.

"I think it's coming back and going in the right direction," the business owner said. "I see what's happened on Beale Street over the last 10 years. It's like here. We've put a lot of blood, sweat and tears into this place."

Rutherford runs the restaurant with his wife, Tammy, and 20-year-old son, Shane.

It took about $100,000 to bring the restaurant up to code with new kitchen equipment, a ventilation system, tile flooring and cleaning up the mess left by the previous owners.

Rutherford said he's going to be there for the long run and he's not worried about what the restaurant was like as Denny's and Silver Spoon. Denny's moved to I-40 and the Silver Spoon's owners encountered unfortunate circumstances that forced them to sell.

"We've got traffic," he said. "The first thing is you just get good food and people start talking about you. You can market all you want. If you don't have something to sell, it won't go. If you get too big too fast, you scare people away."

Rutherford's Route 66 restaurant is ranked No. 5 on tripadvisor.com out of 88 restaurants in Kingman and that has helped bring in tourists, he said. Of 23 reviews on tripadvisor, 16 are excellent and only one is poor. The restaurant serves breakfast, lunch and dinner in the $3 to $20 price range.

"I still think (Route) 66 ... the whole theme is starting to come into its own as a tourist attraction," Rutherford said.