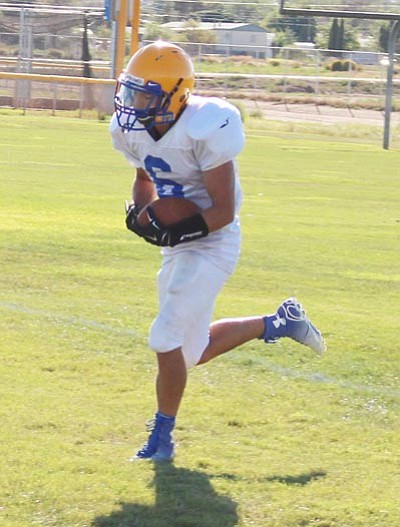 KINGMAN - The pads went on this week as the Kingman High football team continued to sharpen its skills in anticipation of the Bulldogs' season opener Aug. 22 at Lake Havasu.

"It's been a really good week," said coach Greg Tonjes. "Everyone is getting used to hitting. We haven't had many injuries, but they've been physical. Now we know what we can do. We know who is physical and who can play fast."

That knowledge gave the information Tonjes needed to name his starters, though that doesn't mean they're starting all year. Tonjes has incorporated a Competition Wednesday where roles can be won or lost.

Junior Tyler Tapia appears to be a very important cog in the Bulldogs' wheel. He's listed as a starting wide receiver, cornerback, kick returner and punt returner. His upside is huge, but the coaching staff wants more commitment from him after he missed two practices.

Another issue related to missing practices is his conditioning. Tapia was seen sticking his fingers down his throat to induce vomiting toward the end of Friday's practice.

Senior Taylor Ferrin has secured the kicking duties for Kingman. It's his first time on the football field, but he's starred for the Bulldogs on the soccer pitch. He said he's getting used to kicking a football, and that was confirmed when he put several kickoffs into the end zone.

Tonjes' up-tempo offense appears to be clicking for Kingman. Senior quarterback Daniel Williford has a good handle on the system, and the Bulldogs are reaching their goal of getting plays off quickly.

"Anything under 19 seconds is what we want," Tonjes said. "We're running about 16 seconds between plays."

Team and school spirit were on display as well Friday. The Bulldogs jogged around the field in columns of two singing the school's fight song together, and the KHS cheerleaders came out after practice to introduce themselves to the team. The cheerleaders let the football team know they have their backs and brought treats to them.

The work on the field is moving right along for Kingman, but there is more that needs to be done.

"Everything is going good," Tapia said. "Practices are crisp, and we're learning the no-huddle. Our defense still has some things to work on."

Bulldog fans can get their first look at the team at 7 p.m. Friday in the Blue-Gold game.