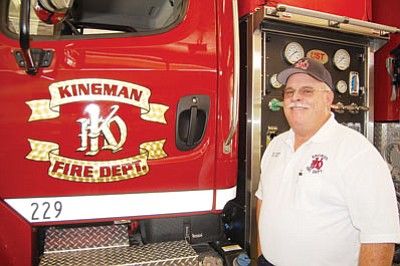 Kingman Fire Chief Chuck Osterman will retire at the end of the year. (DOUG McMURDO/Miner)

KINGMAN - For nearly 70 years, at least one person with the last name of Osterman has served on the Kingman Fire Department.

That will change Dec. 30 when Fire Chief Chuck Osterman steps down after a 38-year career.

Actually, there were Ostermans fighting fires in Kingman as far back as the early 1920s, when the chief's great uncles Albin and Albert volunteered shortly after Kingman established its first organized department.

"My family has been in the fire department since just after it was formed," said Osterman in an interview.

Osterman volunteered for the department in 1976. Three years earlier, on July 5, 1973, he was in high school when a propane tanker exploded and killed 11 firefighters.

The tragedy stood as the worst loss of firefighters in state history until 19 were killed in last summer's Yarnell Hill Fire.

After nine months as a volunteer, Osterman was hired full time in September of 1976.

He would witness a lot of change over the next 38 years.

"The organization changed as we grew," he said. "The public wanted us to provide paramedicine in the early '80s, and be able to respond to incidents involving hazardous materials. We did extensive training."

As the community grew, so did the department. Volunteers were the backbone for decades. They went to a limited number of paid personnel in the 1960s.

The first full-time paid chief was hired after the Doxol tragedy and there were more volunteer firefighters in the department than career firefighters when Osterman was named chief in 1993.

But the end of the volunteers, at least to a large degree, was coming. Osterman said when he started in 1976, the department averaged about 400 calls a year. By 1993, the average skyrocketed to 2,500 calls a year.

"We had a highly dedicated group of volunteers and a lot of them made the fire service a career, but we couldn't ask them to commit so much time as a volunteer."

Whether volunteer or paid, everybody had to attend a fire academy, which requires hundreds of hours to complete, Osterman said. Candidates then had to attend basic EMT classes at Mohave Community College, and they would then be "volunteers."

Osterman said he would ask them to respond to about 900 calls a year. Once they agree, they can expect to undergo monthly drills and training to keep up their skills.

"These guys had (other) jobs," said Osterman. "How can you ask a volunteer for that type of time commitment?"

While the vast majority of firefighters were volunteers when Osterman began - both his father, John, and his late brother Sparky, dedicated four full decades to the department - only about 10 volunteer firefighters remain, along with several more who perform administrative functions. Another brother, Carl Osterman, also served as a volunteer.

In 2013, the Kingman Fire Department responded to more than 5,600 calls for service.

There are 43 fulltime firefighters manning four stations 24/7 this year.

Osterman, like all fire chiefs, puts a premium on safety. The tragic Doxol explosion remains on his mind. He knew every one of the men who perished that day. He went to school with their children. They were part of Kingman's fabric and the city was devastated by the loss of life.

So it should come as no surprise that Osterman has always lobbied for the highest level of training and the best equipment for his firefighters.

He expressed gratitude to every City Council he served during his 21 years as chief, because the elected leaders always supported the department.

They, too, were motivated by the Doxol explosion, he said.

"We always explained and justified the need," he said. When thermal imaging was invented about 20 years ago - the machine allows firefighters to see people and furniture in smoky conditions - Osterman saw how the equipment could save lives.

"Thermal imaging is an extremely good tool," he said. "You can see people in a fire when otherwise you can't see anything. It's not like the movie 'Backdraft.'

"We went to the City Council and said, 'We need one of these.'

The idea was to buy one and keep it with a battalion chief, who would bring it to fire scenes.

"They said they didn't want a delay we'd have with just one and wanted to know what it would cost to put one on each engine," he said.

The recent economic downturn has forced Osterman to "suck it up" and make do with less, but Battalion Chief Bill Johnston, who writes grant applications for the department, has been able to land high-dollar grants to replace the department's 15-year-old self-contained breathing apparatus, defibrillators and portable radios.

To be clear, Osterman said the City Council doesn't buy "Cadillac" fire trucks, but they've certainly helped furnish everything that needs to go on the trucks they do have.

"Technology has been amazing," he said.

While the Doxol explosion remains the most significant event in the department's history, Osterman said other events that remain with him include the Amtrak derailment in 1997.

The train, loaded with 294 passengers and 18 crewmembers, was on its way from Los Angeles to Chicago when tracks compromised by erosion on a bridge about four miles outside of the city limits caused the train to derail.

More than 170 passengers and 10 crewmembers were injured. There were no fatalities.

Last year's Dean Peak Fire in the Hualapai Mountains and several other large wildland fires over the years also stand out in Osterman's mind.

Now, however, Osterman is preparing to step away from the only life he has ever known.

"I'm ready for the next chapter. I don't have a playbook for that. I just know I'm going to be active," he said.

He plans to golf. He plans to fish. He plans to be more of an avid outdoorsman, get in shape, and spend more time with his wife, Carol, and the rest of his family and friends.

"There's no around-the-world trip planned, but there are places I want to see and things I want to do," he said.