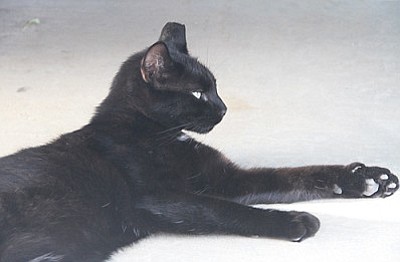 This cat received a tipped left ear when she was live-trapped, taken to Low Cost Spay/Neuter, spayed and then released again. Now she maintains a territory but doesn’t produce any kittens. (JC AMBERLYN/Miner)

KINGMAN - Over 100 feral cats are euthanized at the Western Arizona Humane Society-Kingman shelter each month, and that is only a part of the Kingman area cat and dog overpopulation problem that the shelter, Low Cost Spay/Neuter Clinic, For the Luv of Paws, and several community members would like to see addressed.

They plan to begin this effort with increased spay and neuter programs. A step in that direction is a one-hour meeting concerning feral cats that begins at 6:30 p.m. Tuesday in the Mohave County Library-Kingman. The public is invited.

People working for each of the organizations listed above see with disturbing frequency the problem of too many cats and dogs and not enough available homes for them. They work to spay and neuter pets and provide temporary shelter and find homes for stray and unwanted animals.

But the numbers are overwhelming, and even shelters fill up. For the Luv of Paws, a no-kill animal rescue, has to sometimes turn away animals due to having no more room. WAHS has about 70 kennels (some obtained by splitting up space) for dogs and about 35 cat cages. Yet they can receive an average of 15-20 dogs and cats daily, and some longer-term animal residents have to be euthanized in order to make room for the newcomers.

The problem is a large one.

"All these animals are breeding - that's why the numbers don't go down," explained Kristin Freiert of Low Cost Spay/Neuter. She and Dr. Taylor Ciccone say the Kingman area has had some of the highest euthanasia rates in the state, and they would like that number reduced. Working with the WAHS shelter, For the Luv of Paws, and other community supporters, they plan on tackling the problem first by aiming to reduce the feral cat population in Kingman.

Trap, Neuter and Return programs across the country have seen success in stabilizing or reducing feral cat populations. People live-trap cats humanely, spay or neuter and vaccinate them, then return them where they were caught. If cats are permanently removed, new cats usually just take their place. Instead, these fixed and vaccinated cats maintain their territory but don't breed.

Cats that have been fixed as part of a TNR program often have a tell-tale feature - one slightly clipped, or "tipped," ear. It is a highly visible sign that this cat has been fixed and vaccinated and is now helping keep feral feline numbers from rising. Animals can be spayed or neutered as early as 2 months old or when they weigh 2 pounds.

This "Fix the Feral Cats" project will start focusing on the area around the courthouse in downtown Kingman first. At first they thought there were approximately 20 feral cats in the area. Now they believe the number's closer to 70 or more in a two-block radius. The Low Cost Spay/Neuter Foundation is seeking donations and volunteers to help them with their efforts.

In addition, the group plans to offer some spay and neuter discount programs to the public, starting with low-income veterans. They also hope to offer transportation so that people who live in Golden Valley or Dolan Springs, but who can't get to Kingman, can still get their pets brought here for spaying and neutering. For Luv of Paws has already donated a vehicle for this purpose.

This coalition of concerned citizens and organizations believes that if the community works on this problem, it can be solved and fewer healthy animals will be euthanized. It will take community involvement and education, however, and they hope Tuesday's meeting will be a first step.