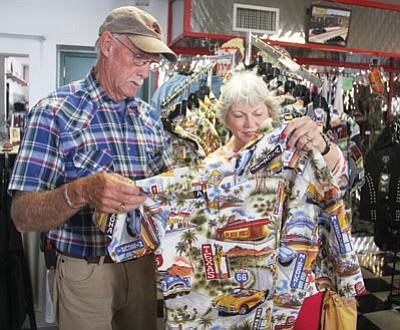 Charlie and Paula Johnson of Santa Barbara, Calif., look over a shirt with scenes representing well-known locations along Route 66 at the Memory Lane Gift Shop on Thursday. (JC AMBERLYN/Miner)

KINGMAN - An estimated 6,000 people attended the International Route 66 Festival in Kingman on Friday and Saturday and from what festival director Dora Manley has heard, everyone had a great time.

Roughly 60 percent of those attending the festival came from out of town, she said.

"I thought it was a huge success," the festival director said Monday.

Facebook is alive with comments from Route 66 roadies about how much they enjoyed the festival, Manley said. She's been receiving a load of "thank you" e-mails from people after they returned home.

"It was just a good time," Manley said. "We had our motels all full. The best thing was community support. Anytime there were questions, there were volunteers to answer them about what was going on, where it was, how to find it."

Some 1,100 people found their way to Beale Celebrations for the exhibition of Route 66 authors, artists and collectors over the two days.

Another 150 to 200 attended the Route 66 Alliance Crossroads conference each day at Mohave County Administration Building. The symposium of noted panelists picked up 3,000 hits on YouTube's live stream Friday, Manley noted.

Several hundred people gathered at Locomotive Park for concerts by The Road Crew on Friday and Saturday evenings, and hundreds more toured the Powerhouse Museum and Visitor Center, Mohave Museum of History and Art and Kingman's historic Railroad Museum.

Roughly 500 people were seen at the drive-in movie and sock hop at Mohave County Fairgrounds.

"We did see a bump in business Saturday," said Carmella Hynes, owner of Sirens Café at 419 E. Beale St. "What I was really pleased with was that the festival drew locals down here to shop and eat at restaurants for the first time. They had never experienced my restaurant.

"Hopefully, that gave us exposure to local business that we'll see again."

Business was busier than usual over the weekend at the Memory Lane Gift Shop as visitors to the International Route 66 Festival grabbed up an array of items representing the Mother Road.

Jan Davis, director of the gift shop, said business was up about 10 percent over the weekend as festival visitors sought souvenirs of the Mother Road.

The store's frosty air conditioning and nearby indoor restrooms also helped bring shoppers into the store, she added with a chuckle.

The various Route 66 T-shirts and ladies' shirts hanging on the racks accounted for the most purchases, said Davis, followed by the white, metal Route 66 wall signs, the Route 66 metal license plates, and the large selection of hat pins and books.

"It went very well this weekend and sales were way up," said Davis. "The festival was very good to us in that area. We had a lot of items in stock and I heard from many people who stopped by that this is one of the best Route 66 shops they've ever visited. I was very pleased to hear that."

The gift shop is run by the Historic Route 66 Association of Arizona, a nonprofit organization that provides grants for businesses along Route 66 and scholarships to students at Mohave Community College.

Kim Bhakta, manager of the Ramblin' Rose motel on Route 66, said Friday was her best night with about 15 rooms rented. Saturday was "so-so" with nine rooms taken, she said. That's in addition to weekly and monthly guests at the 36-room motel.

"I had a few stay with us Thursday, Friday and Saturday. Everybody was gone Sunday," she said.

Terry Glass of Tipp City, Ohio, spent four nights at the motel and said he got a fantastic rate of $38 a night. He complimented Kingman citizens for taking pride in the cleanliness of their community.

United Way organized 300 volunteers to clean up the city before the festival, including extensive work on Ramblin' Rose motel's parking lot.

Some confusion over dates

Some festival-goers complained about the lack of information on activities and locations, and a group of visitors from Phoenix felt the festival dates were misrepresented.

Cindy English said she went online and saw the festival advertised as Aug. 13-17, so she came up Wednesday with friends. They spent two days twiddling their thumbs.

"Now we find out it doesn't start until tomorrow (Friday)," she said on Thursday. "It's like tomorrow never comes."

English said she loves the cooler weather in Kingman and finds the town friendlier than Phoenix.

"Being in Phoenix, nobody says 'Hi.' Here, they ask you how you're doing," she said.

Mike Anderson of Tucson said he passes through Kingman every summer on his way to Las Vegas and Washington. He made reservations at the Best Western Wayfarer six weeks in advance of the festival, but was unhappy with the schedule information.

"We haven't been able to find out what's happening. I called the Chamber (of Commerce) two weeks ago and they said there'll be information at the motel. I said, 'Don't you know?'"

Manley thanked the city of Kingman for providing whatever was requested and the Kingman Police Department for doing a great job, with few or no incidents reported.

Other than the annual Route 66 "Fun Run" from Seligman to Kingman, Manley said she didn't know about any future events.

"Hopefully we'll have something next year. We don't know what," she said.

Time to get some kicks on Route 66
There's still room at the inns
Organizers: Route 66 Festival is ready to go
Parking will be an issue for Kingman festival
Businesses hoping for big boost from Route 66 festival