Golden moments too few, far between in 'If I Stay' 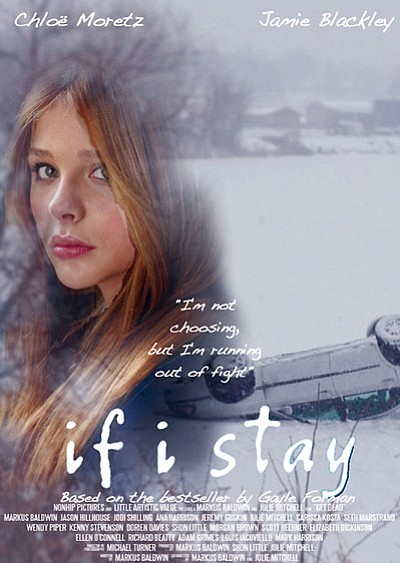 The movie made me think of the time when my brother died ... but it could have been better." That was the sobering sentiment of one adolescent viewer during a local showing of "If I Stay."

Lead actress, Chloe Grace Moretz (Mia), uses a body double during scenes where the cello is played. This shortcut is symbolic of what made a potentially excellent film average. Typically, moviegoers are provided with a few powerful, nostalgic scenes that would hopefully carry our emotional attachment to a film and gain our approval. While this film provides us with a few golden moments, they are too few to boost the film into a category of excellence.

The movie ambles between Mia's out of body experience in the hospital following a car accident and flashbacks of endearing moments with her rocker boyfriend, Adam, and carefree parents.

Moretz typically brings a balanced and well-paced dynamic to her roles. For young adult viewers, she gives a morose yet sweet vibe to the character. However, when compared to the summer's other young adult films, there is little chemistry between Chloe and co-star Jamie Blackley (Adam). Moretz has a better relationship with her cello. There are various lessons on loss, sacrifice and pondering career crossroads as Mia considers walking "toward the light."

Fans of the novel, which inspired the film, may be disappointed the movie lacks the sentimentality and cohesion of the original story. In the novel music is a central theme, but in the movie it is only incidental.

For jaded adult audiences, the only emotional scene with any tangible power comes from veteran actor Stacy Keach. The movie doesn't gel until the final 20 minutes during a bonfire jam-session that holds the artistry and cohesion that was absent in the first hour.

I give this movie 3 musical Miners.

Cast shines in 'The Fault in Our Stars'
Reel Watchers: Shutter Island
Agatha Christie’s classic ‘who done it’ on the big screen
Expanding the DC movie universe with ‘Justice League’
Movie great for kids, but Pete’s draggin’ a bit for adults