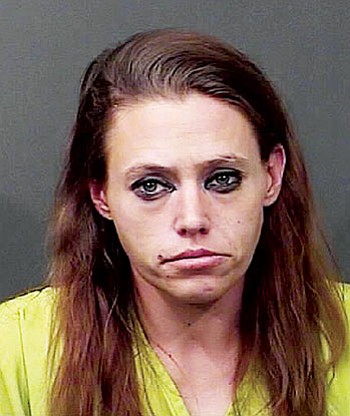 Deputies stopped a vehicle Baldwin was driving in the 2800 block of Northern Avenue at about 12:30 a.m. A record check revealed the car's registration was suspended due to no mandatory insurance.

Baldwin reportedly consented to a search of the vehicle, but was allowed to retrieve a pack of cigarettes from her purse. Deputies allegedly noticed her removing a glass case from the purse and attempt to hide it.

Allegedly inside the case was a syringe containing methamphetamine. A further search of her purse allegedly revealed methamphetamine, morphine, Alprazolam, a metal spoon with burnt residue and three empty syringes.

A record check revealed the warrant for Willmon and a search allegedly revealed marijuana and stolen checks. A bag belonging to Willmon allegedly contained pills and heroin.

Deputies contacted a person whose name was on one of the checks and he told deputies he reported a burglary to Kingman Police on Aug. 14.

Both Willmon and Baldwin were taken into custody without incident.

He was taken into custody without incident in the 2700 block of McVicar Avenue at about 3:30 p.m.

Mann was being booked into the jail in Kingman after his arrest on unrelated charges. A detention officer allegedly found a folded piece of paper containing a white powdery substance. Mann declined to speak to deputies.