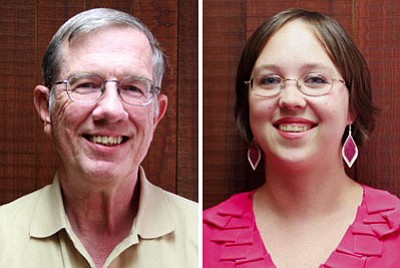 One, two or three of six candidates for City Council can win three open seats outright today - or all six could stick it out until the Nov. 4 General Election. It all depends on voters.

Mohave County voters will also help elect a new supervisor. Seven Republicans and a Democrat seek the District 4 seat currently filled by Jean Bishop, who was appointed to finish the term of the late Joy Brotherton earlier this year.

The Republicans are: Bishop, Bob Boyd, Al DiCicco, Bill Keller, Travis Lingenfelter, Jack E. Pozenel and Ted Roper. The Democrat they will face in the general election is Jack Ehrhardt.

The odds are strong residents will wake up tomorrow with a new Mohave County Superior Court Judge.

The men seek to fill a vacancy left by the impending retirement of Division 2 Judge Randall Bartlett. No other superior court judge faces an opponent and neither does the court clerk.

Seven candidates, five Republicans and two Democrats, seek one of two District 5 seats in the Arizona House of Representatives.

Incumbent Doris Goodale, Kingman, will not seek another term.

State Sen. Kelli Ward, R-Lake Havasu City, does not have an opponent. U.S. Sens. John McCain and Jeff Flake, both Republicans, do not have elections this year and U.S. Rep. Paul Gosar does not have a primary opponent. Mikel Weisser will face Gosar in the general election after losing to him two years ago.

There are also local races for justice of the peace - Mervyn Pitchfork Freedom challenged Justice of the Peace John Taylor. The constables for both the Cerbat and Kingman districts involve Ray Cullison and Debbie Francis, who vie for the Cerbat position, while Neal Hickerson challenged incumbent Mike Cobb.

At the state level, the crowded race for governor will slim down considerably after today.

Embattled Attorney General Tom Horne is in the fight of his political career against Mark Brnovich and there are also executive office elections for Arizona Secretary of State, Treasurer, Superintendent of Public Instruction, Corporation Commission and Mines Inspector.

Political hopefuls line up for bevy of primary races
Candidates lining up for this year's election
Challengers plentiful as filing period ends
Candidates in contested primary for judge raise, spend the most
Voters go to the polls Tuesday