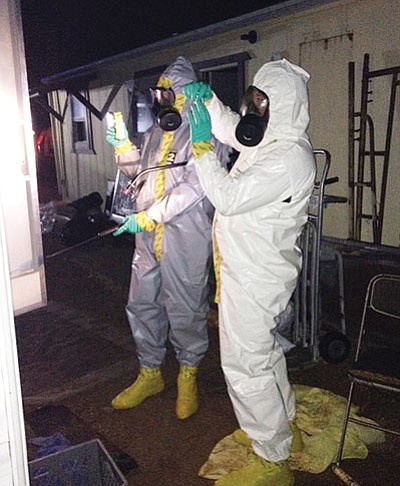 GOLDEN VALLEY - A Kingman man was arrested Tuesday and charged with manufacturing methamphetamine and possessing a pound of the drug, along with other crimes at a property in the 3000 block of U.S. 93 in Golden Valley.

Law enforcement officers who are members of the multi-agency Gang and Immigration Intelligence Enforcement Mission - GIITEM - and the Mohave County Sheriff's Tactical Operations Unit served a search warrant at about 6:30 p.m.

They were there to arrest Randy Anthony Turner, 53, who was wanted on a number of felony drug warrants. Turner was on the property and taken into custody on the warrants, according to Kingman Police spokeswoman Jennifer Sochocki.

A meth lab was allegedly discovered, which prompted a massive response from a variety of agencies, including the Mohave Area General Narcotics Enforcement Team - MAGNET - the Arizona Department of Public Safety and a DPS Ranger helicopter crew, hazardous materials team, bomb squad and crime lab, and the Golden Valley Fire Department. The KPD's HAZMAT team also responded, said Sochocki, along with River Medical.

Sochocki said the search yielded a pound of meth, an ounce of marijuana, drug paraphernalia and multiple handguns and rifles.

This is the second time this year Turner has been arrested on drug charges.

Last February, GIITEM and MAGNET served a search warrant at his home and allegedly recovered three ounces of meth and items linked to burglaries that were investigated by the KPD and MCSO.