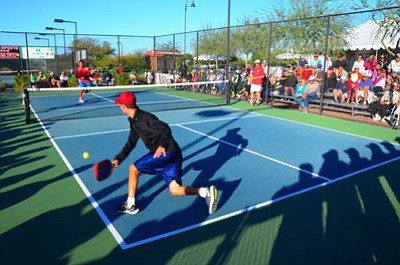 KINGMAN - It's not tennis, badminton or ping-pong. It's pickleball, a racquet sport that's gaining enormous popularity across the country and not just among seniors and retirees who fueled the craze.

Invented on a ferry ride in Seattle in 1965, pickleball is played on a volleyball or badminton court, inside or outside, with two players on each team. They use a paddle to smack a plastic ball over a modified tennis net.

Tim and Carol Weaver, pickleball players from Lake Havasu City, are bringing about a dozen players to Kingman for a demonstration and lessons from 10 a.m. to 1 p.m. Saturday in Palo Christi Elementary School, 500 Maple St.

"We're ambassadors for pickleball," Tim Weaver said. "That's how pickleball has grown. Wherever it's popular, it's because they have pickleball ambassadors."

Weaver and his wife were introduced to the game four years ago. They were attending their grandchild's soccer match in Auburn, Calif., and noticed 30 or 40 people playing pickleball on a nearby tennis court.

"We walked over and they invited us in right away. That's why pickleball is so popular. Pickleball players are very inviting, open, warm-hearted people," Weaver said.

Local pickleball tournaments typically draw a few dozen players. With three courts in a gymnasium and four players on each court, that leaves the rest of them sitting together in the stands.

"So they're not just sitting. They're getting to know each other. It's unbelievable to see how many relationships are formed at these games," Weaver said.

The sport has really blossomed in the last seven or eight years, and roughly three-fourths of the players are retirees, he said.

Weaver is taking the game to junior high schools and high schools, having recently completed an eight-week online course for grades 8 through 12. Many kids are now playing the game in P.E. classes.

About 200,000 people play pickleball worldwide, according to the USA Pickleball Association.

"It appears the relatively benign sport of pickleball mutated into pickleballmania," the USAPA web site states. "While the reasons for this mutation are not generally known, a likely hypotheses suggests that it resulted from exposure of the tennis, racquetball and badminton bacteria to high doses of boredom in Washington state."

Most of the Arizona pickleball clubs are around Phoenix, along with one in Prescott. Weaver said he's trying to form a pickleball league with teams from Lake Havasu City, Prescott, Kingman and Las Vegas.

Pickleballers in Lake Havasu City were strong enough to get the city to allocate $160,000 for new outside courts, Weaver said.

Craig Ellingson, coordinator for Kingman Parks and Recreation Department, said the city currently offers no pickleball leagues or places to play, though he's trying to bring it here. He played the game in high school in Colorado.

"We're hoping that having this demonstration (on Saturday) will help," Ellingson said. "If we get enough people to show up from Kingman, we can start doing an open gym at Palo Christi once a week through the winter and try to get something going in the spring."

To learn more about the game, tournaments and places to play, visit www.usapa.org.