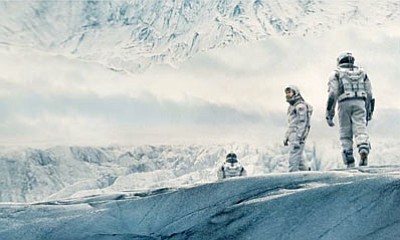 "Interstellar" is a thoughtful, scientific movie. An otherwise simple plot is wonderfully overshadowed by physics equations and theories on black holes, gravity, and the functionality of worm holes.

As usual, there is an apocalyptic world with scarce food and climate changes. Without an immediate solution, the people of Earth will die in a few years. What makes "Interstellar" unusual and puts it ahead of its time is the manner in which it seeks the solution.

Cooper (Matthew McConaughey) is an unlikely hero - a NASA pilot turned farmer. His skills are soon required by NASA, which needs him to fly a team of astronauts through a worm hole to a distant galaxy where three planets are under exploration by astronauts from a previous secret mission. The new mission involves two options: Either settle on a distant planet and repopulate with frozen embryos; or find the solution to the drought and return in time to save humanity.

The catch? One hour on one of the distant planets is equivalent to seven years on Earth.

If you are a sci-fi fan, there are no aliens but rather an advanced, sentient version of humanity that has learned to harness time and gravity. The abstract nature of this understanding is displayed beautifully in one of the final scenes.

If you are easily bored during films, the action and exceptional visuals may not be enough to combat the nearly 2-1/2 hour run time. If you enjoy a good family-friendly film, "Interstellar" explores Cooper's decision to fulfill a lifelong dream and his daughter's lifelong resentment of that dream.

Regrets and forgiveness are running themes of the film as the daughter holds to hope of a promise he made to her. The conventional plot regarding Earth's doom is forgiven by the spectacular plot of space exploration where time is - literally - of the essence.

The scientific accuracy of the film has sparked positive debate among renowned physicists. The "Interstellar" website even has educational activities and Common Core lesson plans for middle school and high school students at https://interstellar.withgoogle.com/for-educators