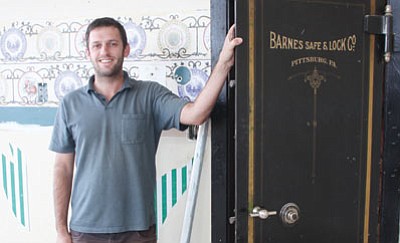 Seth Angle stands in an area on the lower level that will be part of the studio. (JC AMBERLYN/Miner)

KINGMAN - After building more than 700 homes in the greater Kingman area, Doug Angle wants to give something back to the community and provide a working residency for artists from around the world.

Angle, president of Angle Homes, is refurbishing a portion of the historic Central Commercial Building downtown and turning it into an art gallery and studio with artists living above the studio, rent-free for four months.

In exchange, artists will teach classes and hold workshops open to the public, Angle said.

The goal is to create an environment where talented, promising artists can share their experience with Kingman residents, bolster the local art scene and stir cultural movement in the downtown business district.

"I think that's excellent, not only for downtown but for Kingman as a community," said Carmella Hynes, owner of Sirens Café and organizer of First Friday. "I think it's perfect for downtown."

ArtHub, at the corner of Fourth and Beale streets, will consist of a 1,300-square-foot, two-room studio and gallery downstairs, and five residential lofts spread over 2,600 square feet upstairs with two common bathrooms.

Built in 1917, the historic building required new heating and cooling systems, upgraded electrical and plumbing, insulation and drywall replacement, and a lot of work in tight spaces between floor joists.

Angle estimates he'll invest about $120,000 in materials and labor to bring the building up to code and receive a certificate of occupancy. He's getting a discount on the rent from building owner Carol Ott. He hopes to have the project completed by February.

"Just getting the lumber and beams up here was quite a job," the local home builder said. "Then we had two or three Dumpsters of stuff we took out."

The building once served as a bank and post office and most recently as a crafts store, though it has sat empty for a while.

"We looked at other buildings, but none of them were as cool as this old building," Angle said. "It's got nice architecture and lots of big windows for natural light, the kind of space artists need."

The idea behind ArtHub came from Seth Angle, son of Doug Angle, who wanted to create an artists' community and strengthen the culture of Kingman.

An oil painter himself, Seth Angle has reviewed the qualifications of about 10 artists who've applied for ArtHub residency, including one from Kenya. Artists submitted resumes, reference letters, written excerpts and CDs with images of their work.

They also gave a statement of intent on what they would be teaching in their classes.

The artists are expected to move in when the project is complete in February and will stay four months, Seth Angle said. There will be continuous residency cycles, allowing for various artist programs to be presented in Kingman throughout the year.

Angela Patterson, owner of Beale Street Brews coffee shop, said an art community is part of the vision she had for downtown Kingman when she opened her business nearly eight years ago. She's also an artist and included a small gallery as part of her coffee shop.

"My gallery is my passion. The coffee shop finances it," she said. "To wrap yourself around what it costs to own a piece of art ... people have to adjust their priority. It's a lot of square footage to pay for and not make money."

Most of the artists who exhibit in her gallery are local, though some come from out of town. Kingman has a lot of great artists and Beale Street Brews gives them a venue to show their work, Patterson said. Another gallery would create more foot traffic.

"I think it's wonderful," said Scott Rhoades, who recently sold Cellar Door wine bar in the Central Commercial Building. "I'm encouraged that downtown will continue to grow and flourish. We've got a little nightlife now."

Jim Federico, a retired fireman from Yucca, said opening an art gallery in downtown Kingman would be a great opportunity to attract more people.

"I think there's a resurgence," the visitor said. "It's just a cycle. We've seen this area at the peak 14 years ago. Believe me, I see it coming back a bit."