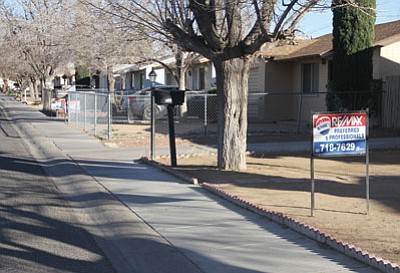 For Sale signs are part of the Motor Avenue landscape these days. Home prices are up, with the December median sales price sitting at $124,000, $30,000 higher than the median in December 2012. (JC AMBERLYN/Miner)

KINGMAN - The latest housing market reports for Kingman and Mohave County provide a mixed bag of news for both buyers and sellers, but signs indicate the area is in a slow but steady recovery.

There were 60 home sales in Kingman in December, the exact number sold one year earlier, but nine more than the 51 sold in November, according to the Market Action Report, a real estate analysis provided by James Durham, a managing broker at Coldwell Banker in Lake Havasu City.

December levels were low compared to the two previous years, said Durham in his report. Indeed, the approximately 779 homes that sold in 2013 fell short of the 809 sold in 2012.

And while home sales are down, home values increased somewhat dramatically last month.

The median sales price - defined literally as the middle of the market as opposed to the average sales price - was at its highest point in years, said Durham.

The 8.3 percent jump from November's average sale price of approximately $116,300 was even more significant.

Home values could continue to rebound as the inventory of homes on the market shrinks. According to Durham, 288 homes were up for sale in December, down 5 percent from the 303 available in November and down 6.5 percent from 12 months earlier.

The rule of thumb, said Durham in his report, is inventory drives prices: "A comparably lower MSI (the number of months needed to sell all of the inventory) is more beneficial for sellers while a higher MSI is better for buyers."

December's MSI of 4.8 months was at a "mid-range" compared with the previous two Decembers.

It's premature to suggest the seller suddenly has an advantage after years of recession. According to Durham's analysis, homes sold in December were on the market an average of 94 days, a nearly 29 percent increase over the 73-day average in November and more than 30 percent from the 72 days in December 2012.

The average days on the market is calculated from a home's listing to contract.

Regardless of how long it takes to sell a property, property values clearly are on the rise and the evidence is market-driven.

The selling price per square foot, said Durham, is a "great indicator for the direction of property values."

He explained that since both median and average sales prices can be impacted by the mix of high- and low-end properties in the marketplace, the price per square-foot provides for a much more accurate estimate.

Another indicator the market continues to favor buyers is Durham's comparison of the selling price versus the listing price.

The lower the ratio is below 100 percent, he said, the more of a buyer's market exists. A ratio above 100 percent reflects a strong seller's market.

In December, buyers were paying about 96.1 percent of what sellers were asking, down slightly from the 96.2 percent in November and the 96.5 percent in December 2012.

Sales were down significantly year over year, but median and average prices increased significantly, as they did in Kingman.

Inventory went down by about 900 homes in Mohave County in 2013, a good sign for sellers, but the average days on the market increased from 82 days in November to 86 days in December - which is a good sign for buyers.

Identical to the city, people who purchased elsewhere in Mohave County also paid 96.1 percent of the seller's asking price in December.