Made in Kingman: Coffee shop owner spills the beans on her roasting methods 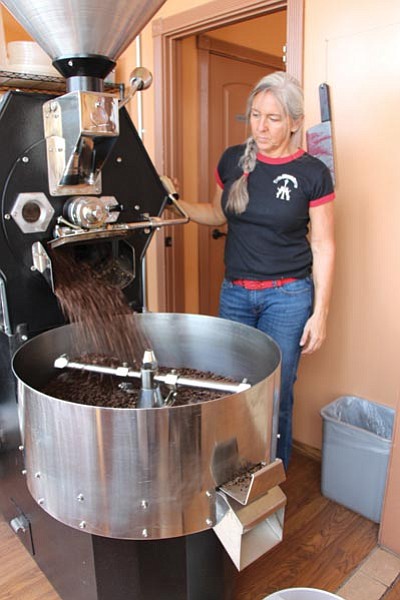 ALAN CHOATE/Miner<BR> Angela Patterson watches as the process of roasting coffee beans comes to an end at Beale Street Brews.

"America lacks the decadence required for a truly great coffeehouse. But we're acquiring it, I think." - Great Food Almanac (excerpted from FoodArts)

KINGMAN - Angela Patterson has always been a coffee lover.

She would roast her own beans at home, experiment with different coffee origins and blends and roasting times.

On the road she kept a keen eye out for independent coffee shops. She would sample their coffee and take in the ambience, filing away in her mind what she would borrow and what she would not.

For 25 years, Patterson planned for the day the last of her children would graduate from Kingman High School so she could open her own coffeehouse.

At any given time, customers can choose coffee from five different origins, but Patterson changes them up on a constant basis.

Columbian, Indonesian and Mexican are used in her espresso blend.

When it's in season, Patterson loves to purchase Malabar from India, an exceptionally smooth blend that gets its flavor thanks to exposure to the wet, lashing winds and salty monsoon rains that fall on the Malabar Coast.

"It's an all-around good coffee," she said. "It's hard to get here because it's almost seasonal."

While Patterson's lengthy due diligence allowed her to avoid many of the surprises new small business owners face, she was taken aback by one aspect.

"It's work-intense," she said. "This has been a lot more work than I thought it would be, but it's been worth it. I did enough research so there's not been too many surprises."

If 10 p.m. seems late for a coffee shop to stay open, consider that Patterson owns one of the few that also sells alcoholic beverages.

"I got my liquor license last year and people are starting to notice," said Patterson. "They don't relate a coffee shop with alcohol."

While adding alcoholic beverages - including the customer-favorite espresso-based martinis - and partnering with a brewery across the street, Patterson knows the continued success of Beale Street Brews hinges on the quality of her coffee roasts.

Patterson spilled the beans on what it takes to roast the perfect blend.

For Patterson, the key is to order the best green coffee beans from California and Oregon and internationally from India, Africa and South America.

Her sparkling, stainless steel roaster, which she calls The Witch, can handle up to 22 pounds of green coffee beans per roast, but Patterson likes to stick with between 12 and 17 pounds.

Patterson doesn't use her eyes or a thermometer to judge when the roast is done. She uses her ears.

There are two temperature thresholds in the process called cracks.

The beans literally crack, telling the roaster they've reached one of two blends.

She leaves the beans in longer after the second crack to get to a darker roast.

So what's the difference between the three roasts? In a word, taste.

During the first phase of the process, the beans absorb heat, but once they reach a temperature of about 175 degrees Fahrenheit, the beans become exothermic, meaning they give off heat.

Roasting coffee beans is similar to preparing grapes for winemaking. Roasting is what gives coffee flavor, smell and density. In other words, roasting gives coffee its character.

After the roast, Patterson places the beans in a cooling bin until they are ready to grind. Roasting mere feet from where her three baristas serve customers, Patterson is able to provide the freshest coffee possible.

The favorite coffee for her customers is Mexican Chiapas, which is described as a bean with bright and sweet acidity with medium body, spice and fruit undertones with a hint of chocolate.

Coffees from Sumatra and New Guinea are other favorites for her Kingman customers who buy both beans in a package and coffee by the cup.

Caramel lattes are the most popular drink overall, with blended iced drinks favored in the summer.

She said the espresso martinis are popular.

"They're really decadent," she said with a smile.

Patterson roasts every Sunday. She starts very early in the morning during the hot months and roasts in the afternoon during the winter because the heat from the roaster helps to keep Beale Street Brews warm.

A coffee shop is just part of Patterson's business. She also has an art gallery in the same location. She picked downtown on purpose, saying she wanted to "help it make a comeback."

The business took hold last year, and now Patterson is ready to branch out. She recently purchased a concession trailer she will bring to community events, and she hopes both the coffee shop and the stand help her indulge in the gallery, which she calls her passion.

"I'm an artist and I come from a family of artists," she said. She showcases different Kingman-based artists each month and everything in the gallery is for sale.

Ken McAfee is her resident artist and his work is currently on display.

Each month's show has a theme tied to a holiday or local event.

February, for instance, honors Valentine's Day with "Lovers and Lusters," and October is the month for "The Macabre" thanks to Halloween.

The pottery on display at the gallery is top-notch. Known as Mata Ortiz pottery after the ancient village in Northern Mexico where it's made, Patterson said the entire community is full of potters who follow the town's pottery-making process that began about 1,000 years ago.

Of all the irons Patterson has in the fire, however, the one that she's most attentive to is roasting coffee for her customers, right here in Kingman.

Make coffee, not war: Who has the best beans?
Beale Street has a reason to celebrate
Coffee retailer: Souvenir stores not the answer
Downtown pioneer moving to new, larger location
Rickety Cricket will open in Planet 13 in Vegas