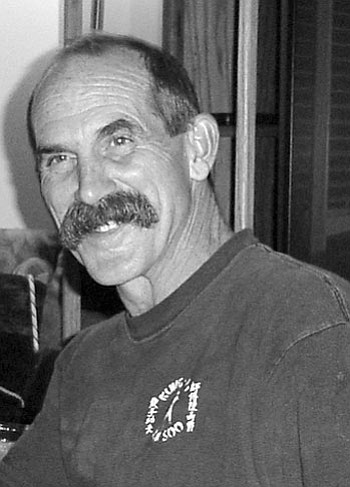 Stephen Earl Meredith lost his battle with pancreatic cancer on Dec. 15, 2013. He passed away peacefully at his home in Kingman, with family by his side.

Stephen was born in July of 1953 in Fort Bragg, N.C. He grew up in the city of Cypress, Calif. He served in the US Army, in the 82nd Airborne as an Army Ranger. He married the love of his life, Karen Ott, in March of 1982. Together they raised five children who have all grown to become strong, independent adults and an infinite source of pride for Stephen. In their years together they also raised many dogs, horses, chickens and plants. Stephen loved to grow fresh fruits and vegetables for his love Karen to use in making preserves and other canned goods. In 1999 Stephen began practicing the art of Kung Fu San Soo under the direction of Master Kurt Bellman in Riverside, Calif., where he earned a fourth degree black belt. He was also an avid reader who loved fishing and camping, but his biggest loves were his five children and his many grandchildren.

Stephen is survived by his wife of 31 years, Karen L. Ott Meredith of Kingman; and their son, Ryon Alan Gambill and his daughter, Hannah Marie, of Palm Desert, Calif.; daughter, Jennifer Lorraine Smay, her husband, Christopher Smay, and their children, Zorian, Leland and Julian of Mountain Home, Ark.; daughter, Elizabeth Anne Gambill and her son Ethan of Mountain Home; Joseph Earl Meredith and his children Skyler, Ainslee, London, Liam and a daughter on the way of Cedar Park, Texas; and Kevyn Meredith and his wife Lady Meredith of Riverside. He is also survived by his mother, Alice Helen Meredith of Cypress, Calif.; and siblings, Theresa Elizabeth Cooney of Bel Air, Md., Anna Maria Sadera of Myrtle Beach, S.C., Janice Maureen Badger, Lisa Jean Moorlag of Orange, Calif., Holly Marie Wynne of Bellingham, Wash., Tierena Kay Meredith of Fresno, Calif., and Craig Stewart Meredith of Fresno, Calif., and a multitude of nieces and nephews.

Stephen's career included retirement from the county of Riverside, Facilities Maintenance (EPA) and the State of Arizona (DEMA) at Camp Navajo, Bellmonte. Everyone loved working with and working out with Steve. He was always "super" and loved life, living to the fullest.

The family would like to especially thank the Oncology Hematology Staff at Mayo Clinic Hospital and the Kingman Regional Medical Center, as well as the wonderful, dedicated nurses at the KRMC Hospice for their help during Stephen's battle with cancer. The staff at these facilities were a great source of support for us these tumultuous past eleven months.