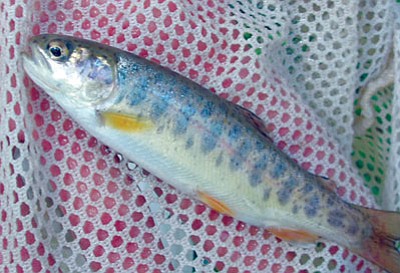 USFS/Courtesy<BR>This rainbow trout caught in the Sawtooth National Recreation Area in Idaho. The announced closure of a Mohave County hatchery that releases rainbow trout locally could have a significant impact on the area’s tourism economy.

A few weeks ago, I received a press release from both the U.S. Fish and Wildlife Service and the Arizona Game and Fish Department regarding the closure of the Willow Beach Fish Hatchery.

At first I didn't think much about it, but this is a situation that will have a major impact on the future of sport fishing in the Colorado River, from Hoover Dam all the way down to Bullhead City.

And it's a situation so serious that I'm hoping our elected officials will join together and try to keep this from happening.

Here is some history.

In the past year, there have been two events related to low water levels in the Colorado River that resulted in major fish kills at the hatchery, which is located on the river 14 miles south of Hoover Dam.

On August 12, piping used to bring cold, fresh water into the hatchery was clogged with vegetation. As a result, more than 40,000 rainbow trout were lost.

On Nov. 21, another low-water incident resulted in the loss of an additional 20,000+ trout, while another 11,000 were released directly into the river as an emergency measure.

Repairing the intake pipes needed to keep fresh water coming into the hatchery would cost at least an estimated $2.5 million, so the decision was made to close the hatchery to raising cold-water fish, which means trout production at the facility would end.

Here is the problem.

In the winter (October through March), there have always been weekly trout stockings at Willow Beach (2,000), as well as into the river around Bullhead City at the rate of 4,000 per month.

They also stocked trout in Indian reservation ponds in the area.

That means that trout fishing in the river from Davis Dam to Ft. Mohave is gone forever!

That means a lot of lost revenue for Arizona and the river communities that see an influx of winter visitors and locals who fish for trout.

Plus, the trophy trout fishing in the Colorado River around Willow Beach will soon be just a memory.

"There is no question this [hatchery closure] is going to impact anglers from Willow Beach south to the Bullhead City area," he said. "Of course, other species remain in Lake Mohave and the Colorado River, but without stocking efforts, rainbow trout will not consistently be available long-term."

I was told that Sen. John McCain, R-Ariz., has written a strong letter to the head of the U.S. Fish and Wildlife Service about this issue.

But other elected officials, including the Mohave County Board of Supervisors, need to get involved and try to resolve this issue.

Right now there are no rainbow trout at Willow Beach.

There is the native fish portion of the hatchery still open, which gets its water from wells and not the Colorado River.

If something isn't done, trout fishing in the Colorado River from Willow Beach south to Bullhead City will soon be gone.

And while that means a tremendous loss for anglers, it will also mean a huge economic loss for Mohave County.