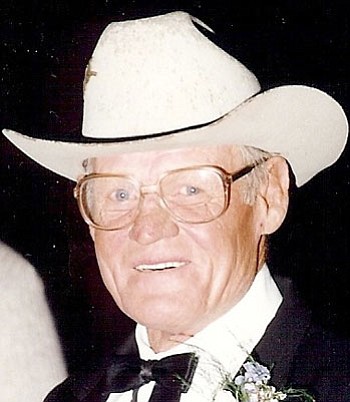 James Rodger Medlin, Jr., a cowboy among the most elite of cowboys, went home to his Lord on Dec. 19, 2013. Jim was born Feb. 14, 1931, in Globe, Ariz., to James R. Medlin Sr. of Globe, and Mahala Halladay of Pine Top, Ariz. As a young boy the family purchased the Diamond W Ranch and moved to Wikieup, Ariz. During his high school years he worked the family ranch plus broke wild horses and worked on many local ranches around Mohave County. He also was a butcher for Central Commercial Grocers.

In the 1970s he married Peggy Roberts and moved to Flagstaff, Ariz., to pursue a backhoe business and HVAC services and also helped raise her three children, Wayne (Cheryl) Perry, Rikki Perry and Kasey Gill, all of Phoenix.

In the late 1990s Jim married Kaye Allisen, whom he was devoted to until his death. Jim is survived by his wife, Kaye of Caliente, Nev.; his brother, Steve (Glenda) Medlin of Alamo, Nev.; sister, Kathy (Russell) Davis of Truxton, Ariz.; sister, Patricia "Teenie" (David) Davis of Truxton, Ariz.; and his children. Jim was blessed with many loving grandchildren, many great-grandchildren, nieces, nephews and cousins.

He was preceded in death by his parents, Jim and Mahala Medlin; brothers, Glen Medlin, Fred Medlin and John (Sandpaper) Medlin; sisters, Celia Morton and Mahala Dollarhide; and granddaughters, Mona Masters and Falon Medlin. Jim had a passion for working. At retirement he moved to Rachel, Nev. There he worked with his brother Steve Medlin on his ranch and worked HVAC on the side. He was active in Army Reserves, Sheet Metal Union, Elks Club, Lions Club, church, community food banks, local mines and the Rachel, Nevada Park. He served as president of Penoyer Valley Electric Coop of Rachel, Nev. He loved to solve mechanical problems and was always inventing gadgets. He loved helping people and was always doing whatever was in his power to make their lives easier. He was an excellent gardener and loved working with animals, especially horses. Jim never missed a chance to dance and kick up the heels of his boots! He loved to dance. He enjoyed hunting, never missing a hunting opportunity. He taught his boys how to hunt and how to find their way back to their "hunting camp." Jim was an honorable man who loved his family and friends. He was a good husband, father and comrade. He will truly be missed.

A memorial service will be held at 11 a.m. on Saturday, Jan. 25, at Kingman Christian Church, 2830 Gordon Dr. Donations can be made on behalf of Jim Medlin for Rachel Baptist Church to Bethany Baptist Church, 210 Wyoming St. Boulder City, NV 89005.