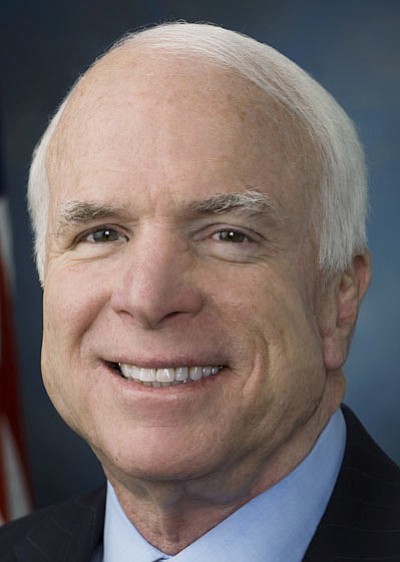 PHOENIX (AP) - U.S. Sen. John McCain hasn't decided whether he'll run for a sixth term, but the former GOP presidential nominee said Tuesday that the Arizona Republican Party's censure of him over the weekend may just have provided the motivation to seek office again.

The censure vote came during a meeting of state committee members who cited McCain's voting record as being insufficiently conservative.

In response Tuesday, McCain said he has a strong conservative voting record and led the fight in the Senate against Obama's health care plan. He blames the censure on uninformed "extremist" party elements, and said, if anything, it only bolsters his consideration to run for a sixth term in 2016, the year he turns 80.

"If there's such a thing as motivation to more seriously consider it, it's what just happened," McCain told The Associated Press.

Timothy Schwartz, the Arizona Legislative District 30 Republican chairman who helped write the censure resolution, said the vote showed that McCain was losing support from his own party.

"It shows that, again, a very extremist element of the party has taken over the party apparatus," he said, adding that polling shows he maintains strong support in Arizona from Republicans, Democrats and independents.

"I've won every race I've run and I'm proud of my record, and if I run again, I am totally confident of re-election," McCain said.

In a Facebook post this week, former Alaska Gov. Sarah Palin and McCain's 2008 running mate, defended the senator as "an American hero and a friend."

Palin said McCain has helped lead the fight in Congress against the "far left agenda."

McCain was elected to the U.S. House of Representatives in 1982 and won his Senate seat in 1986.

He unsuccessfully sought the presidency in 2008 then easily won another Senate term in 2010. He has challenged Obama on foreign policy but has worked with Democrats on immigration legislation, noting "70 percent of the people in Arizona want to see comprehensive immigration reform."