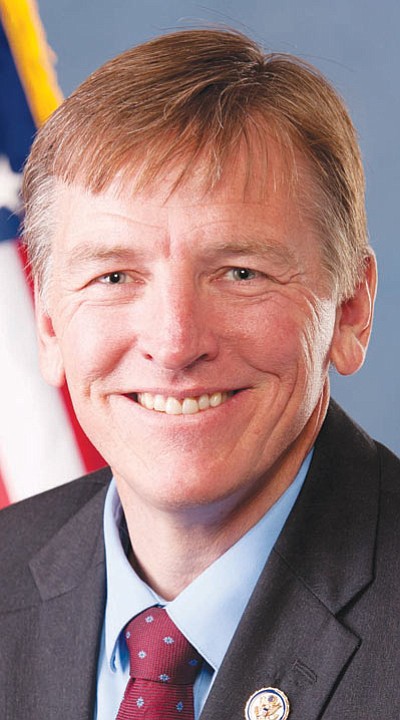 KINGMAN - Get fish off the government hit list and into the water where they at least have a fighting chance at becoming the one that got away - that's what Rep. Paul Gosar, R-Ariz., hopes to achieve with his Fish Hatchery Protection Act that was introduced to Congress this week.

The bill would preserve propagation programs such as the rainbow trout stocking program at Willow Beach National Fish Hatchery that some see as essential for the recreational fishing industry.

A November decision by the U.S. Fish and Wildlife Service to terminate those programs and close some of the nation's fish hatcheries is "extremely misguided" and will harm local economies, Gosar said.

"My legislation will reverse the short-sided decisions by the administration, preserve jobs, strengthen local economies and ensure the continuation of vibrant recreational fishing economies in Arizona and throughout the nation," he said in a prepared statement.

She testified before the Appropriations Committee in April to set aside money to fix a broken pipe at the hatchery.

"That's the issue, but it was dovetailing into a new policy to stop stocking sport fish around the country," she told the Kingman Daily Miner Thursday. "Now it's about what's going to happen to these programs in the future."

The economic impact of fishing in Arizona has been well documented.

Some 650,000 fishermen spend more than $890 million in recreational cities such as Bullhead City, Lake Havasu City and Laughlin, said Robert Mansell, chairman of the Arizona Game and Fish Commission.

The National Fish Hatchery System returns $28 to the national economy for every dollar spent and generates $3.6 billion annually, the Fish and Wildlife Service estimated.

Angius said the Fish Hatchery Protection Act reiterates that only Congress can stop or mitigate fish propagation programs. The U.S. Fish and Wildlife Service is overstepping its authority by doing so, she said.

Sport fishing and hunting took another blow Wednesday when Sen. Harry Reid, D-Nev., blocked an amendment to a sportsman's bill by Sen. John McCain, R-Ariz., that would preserve hunting, shooting and fishing on public lands, with special mention of Willow Beach, Angius said.

The Willow Beach hatchery, 11 miles south of Hoover Dam, was established to produce rainbow trout for stocking the Colorado River, but started focusing on threatened and endangered species such as the bony-tail chub and razorback sucker after the Endangered Species Act became law in 1973.

Last year, the hatchery was plagued by two large and unexpected rainbow trout die-offs that led to closing the stocking program.