Organizers: Route 66 Festival is ready to go
Plans are in place and hotels are filling up 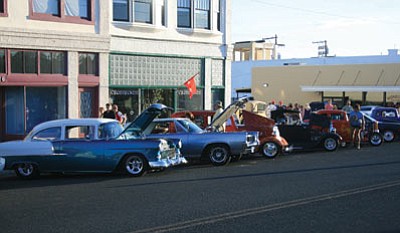 Scenes like this one from a Chillin’ on Beale Street car show and block party from June, 2009 will be magnified by 100 percent next month when the International Route 66 Festival kicks off in Kingman for the first time. (JC AMBERLYN/Miner)

KINGMAN - Thanks to the steady leadership of Festival Director Dora Manley and the Chamber of Commerce, the city, the Sandbox - and too many other people and organizations to mention - Kingman is just about ready for a bunch of company to stop by for a visit next month for the International Route 66 Festival.

Manley, who took the proverbial bull by the horns and helped get festival plans on track after they nearly derailed several months ago, told the City Council on Tuesday night that the effort to prepare for the festival has sparked civic pride throughout the city.

"The festival has really created a new sense of community," she said. "People are out painting their properties and cleaning up."

Manley said she and her husband, Kurt, drove Route 66 from Kingman to Joplin, Mo., site of last year's international festival that celebrates the iconic highway, in three quick days.

"We wanted to get a feel for what Route 66 means to people," she said. What she and Kurt came away with, she said, is that Route 66 represents freedom.

And the desire for freedom is not exclusive to Americans.

Manley said Route 66 clubs in Germany, the Netherlands, the Czech Republic and Japan have booked rooms - and they are all eager to pose for photographs with Mohave County's rodeo royalty. Individual families from around the world have also made reservations to be in Kingman Aug. 14-17.

"They plan their vacations around this event," she said. "Route 66 is freedom to them."

Visitors from across the nation will also descend on Kingman and there will be plenty of fun to be had for visitors and residents alike.

More than 700 car enthusiasts have committed to participating in one of two car shows - TNT Auto is sponsoring a show devoted to the Volkswagen and the timing was perfect for Chillin' on Beale Street to put on its monthly car show and block party during the festival.

Manley said more than 350 people have signed up for each show. Electric cars will also be available as part of a push to designate Route 66 the Electric Highway.

With less than a month to go, Manley said four local motels are sold out during the four-day weekend and three more are very close to full occupancy.

Several more report about 50 percent of their rooms have been reserved with more being made every day.

That they will come is no longer in question, and neither is it in question that it will be a success, according to Manley.

"My feeling is, when it's over we're going to look at the festival and say, 'That's the best thing that ever happened to Kingman,'" said Manley in an interview Wednesday.

"Watching it all come together has been an amazing experience."

There will be live music, food and beverage vendors, beer vendors, merchant vendors, art exhibits, book signings, and even bowling and golf tournaments.

Desert Diamond Distillery will hold tours and rum tastings and there will be wine tasting and a chuckwagon barbecue at Stetson's Winery.

An exhibit on artists, authors and collectors will be featured at Beale Celebrations.

The Road Crew, a band renowned for its Route 66-themed songs, will sing "Songs from the Mother Road."

Reunion, formerly known as The Lettermen, will perform their hits from the 1960s and '70s at Lee Williams High School and the Garlin Hackney Band will play as part of the Sounds of Kingman summer concert series.

Look in the Kingman Daily Miner for a more complete listing of event times and locations as the festival nears.