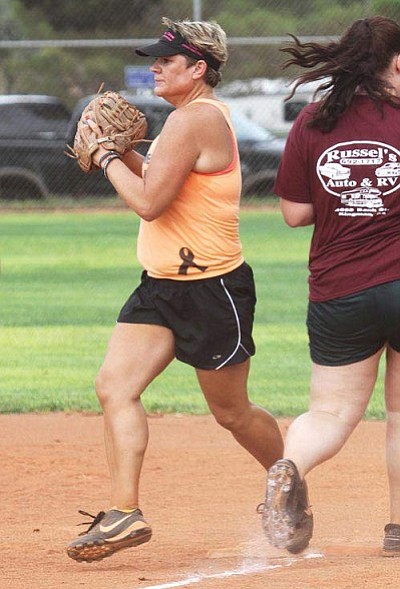 When Kingman was graced with John Bathauer's presence he could be counted on to give back to the community with everything he had. Though he passed away two years ago to cancer at 46, his spirit continues on with his work.

"John always supported the kids," said his widow Anne Bathauer. "He would have wanted us to give back to the community."

The funds raised so far have put in two benches in Centennial Park, covers at Southside Little League Park and doled out $1,600 in college scholarship money. The scholarship transactions began a year ago when Vanessa Ozzanne was awarded $600 to help her attend Mohave Community College from a separate donation. After last year's tournament, Brittany Burgess received $1,000 to attend Northern Arizona University.

The scholarship is awarded based on an essay by seniors who are graduating Kingman High School and have experienced some sort of struggle in their lives.

"It's for kids who have had trials and tribulations but have been resilient," Bathauer said. "As a guidance counselor, it seemed like a natural thing to do. With the costs of college, if we can help even one student it means a lot."

The Bathauer family, including daughter Lexi, 18, and twin sons Matt and Mike, 13, judge the applicants and determine the winner. However, they are not eligible for the scholarship.

"It's important the kids learn to give back because the community has given so much to us," Bathauer said.

Tournament games are expected to begin at 8 a.m. Saturday, but there is going to be a lot more happening than softball games. A disc jockey will be on hand to play music throughout the day, and water games for the kids will be available.

Instead of a home run hitting contest, a hitting challenge that is open to everyone - not just home run hitters - will take place. Seventeen different sponsors have stepped up to offer 17 different $100 prizes. For a $5 entry fee, a batter is to get 10 swings to win a prize.

"It's going to be a lot of fun," Bathauer said. "People have given so freely with the prizes and everything. It's nice."