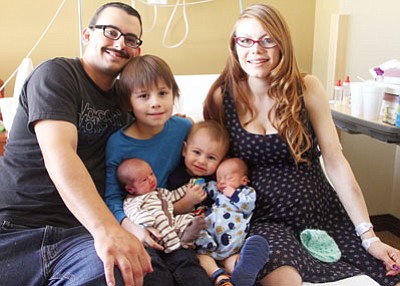 KINGMAN - The adage "When it rains, it pours" has held true the past two months for Desiree Star Embrey and her family.

Desiree, 25, and her fiancé, Matthew Delmonaco, 28, have seen their share of bad luck during that time. Embrey, who was expecting twins, was put on total bed rest after she began dilating early. During that time, Matthew's 1-year-old son, Isaac Delmonaco, broke his leg as he played on the slide at restaurant, and Matthew lost his job at Denny's because he had to stay home with both patients.

The family, including Myles Embrey, 7, was evicted and had to move in with Matthew's parents, Richard and Tina Delmonaco, who live in the 1700 block of Airfield Ave. And to top it off, the young couple's 2009 Pontiac G6, on which they still owe $4,000, was smashed when lightning struck a 65-feet-tall pine tree in the yard and it hit the back of the car during the July 14 storm that hammered Kingman.

Bad as that was, though, it could have been much, much worse.

"I was in that car five minutes before the lightning struck to grab some clothes out of it," said Desiree. "All we had on it was liability insurance, and his parents' homeowner policy won't cover this because it was a natural disaster. When I saw what happened, I thought 'Are you kidding? We've had the worst luck over the past two months and now this?'"

The storm let loose with just under an inch of rain, with the hardest his area between Stockton Hill Road and Andy Devine Avenue along Interstate 40, according to the National Weather Service. Radar showed torrential rain, strong winds, small hail and even the possibility of a microburst.

For the struggling family, the loss of the family car has been monumental.

Then the twins, Jeremiah and Nicholas Delmonaco, were born prematurely July 20 at Kingman Regional Medical Center.They will be there for several weeks as they gain weight, and Matthew and the two older boys walk back and forth to the hospital daily in the heat to see Desiree and the newborns.

Myles, meanwhile, starts school Aug. 7 at Hualapai Elementary and needs to be transported. And there will be doctor visits for Desiree, who needed a Cesarean section because the twins were tangled around each other, and for the babies after they get out of the hospital. For now, Desiree stays at KRMC with the twins to nourish them naturally between tube feedings.

The blessings of good medical care and two beautiful baby boys are bright spots the extended family clings to.

If not for that, Desiree notes, we'd "be totally out on our luck right now."

Matthew will remain home to help her with the children for at least a month after she and the babies are discharged. Trading income for a stay at home dad is just another step toward the family getting back on its feet.

"It's been really hard, but I'm just glad we weren't in the car when the tree fell," Desiree said.