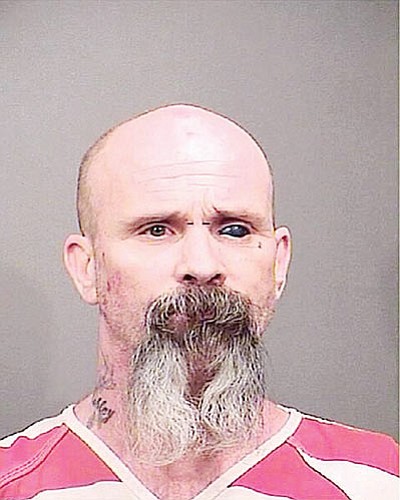 KINGMAN - Just days before his trial on counts including first-degree murder was set to begin, Michael Anthony Rivera pleaded guilty to killing his stepdaughter's boyfriend when he ran him down - twice - on Nov. 21, 2011, and to attempted first-degree murder for trying to run down the victim's father, who witnessed his son's violent death.

Nicholas Gerenscer, 23, was pronounced dead where he lay in the street in front of his home in the 2100 block of Valentine Avenue.

Rivera was driving a Cadillac when he hit Gerenscer, who was in the backyard when he heard a commotion in the street involving his father and brother.

He jumped a fence and was standing in the street when Rivera hit Gerenscer with such velocity that he flew over the car. His shoes landed 30 feet away. Rivera turned the car around and ran over Gerenscer's prone body and then attempted to strike his father and brother.

There was bad blood between the families that went back to the Baldwin Park area of California. Kingman Police officers were called to several incidents involving Rivera and the Gerenscer family.

While the nature of the conflict remains in dispute, Gerenscer's mother, Renee Ceniceros, told the Miner in January that her son's girlfriend - and the mother of his child that she has since adopted - was a negative influence on him. She also said Rivera seemed to have an unusually close relationship with his stepdaughter, who "liked to stir the pot."

There have been rumors the incident was gang-related, but Rivera told police the killing was an accident.

That might have been hard to show if the case went to trial. Witnesses said Rivera had been up and down the block several times before he struck Gerenscer, and that the parties were yelling at each other and making gestures.

There were ripples following Gerenscer's death and Rivera's arrest.

Less than a month after the killing, Gerenscer's cousin, Jesus "Jesse" Camacho, 18, and two juvenile males committed a home invasion and attacked one of Rivera's daughters and her boyfriend.

Camacho pleaded guilty and was sentenced to six years in prison in 2012.

The attack left a 15-year-old suspect with a gunshot wound to the knee.

In exchange for Rivera's guilty plea to second-degree murder, Judge Steven Conn will likely send Rivera, 50, to prison for 20 years. Prosecutor Bob Moon and defense attorney Stephen Duncan hammered out the deal that calls for a 20-year term.

Rivera backed out of a similar deal that would have resulted in the same sentence last January for reasons that were never articulated, except that he "didn't trust" his attorney.

Moon said Conn will likely sentence Rivera to a term between three and 12 and a half years on the attempted first-degree murder count regarding the victim's father, but it doesn't matter as the sentences will run together. The 20-year term, however, is flat time, meaning Rivera is ineligible for early release.

He already has a decent head start given the credit he will likely receive for the time he has been in custody. On the day he is sentenced, Rivera will have spent more than 1,000 days in the Mohave County jail - about two years and nine months.

He also faces sentencing related to an incident at the jail last November when he reportedly struck a correctional officer in the face after the officer entered his cell.