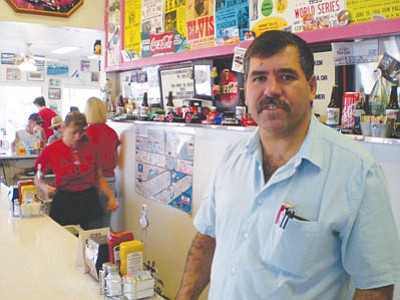 Armando Jimenez is one of several downtown Kingman business owners hoping for a bonanza when the Route 66 International Festival comes to town. (HUBBLE RAY SMITH/Miner)

KINGMAN - Armando Jimenez wants to see a gaggle of tourists lined up outside Mr. D'z when the International Route 66 Festival comes to Kingman Aug. 14-17.

The 1950s-style diner with Route 66 memorabilia plastered on the walls and a classic truck parked outside is already a popular place to load up on burgers, fries, shakes and homemade root beer.

You might not be able to find a single seat at the counter when the estimated 3,000 to 5,000 Route 66 roadies hit town for the festival.

"I know it's pretty big and they're expecting a lot of people," Jimenez said about the festival held at towns along the historic highway. "I hope there will be a lot of people."

Downtown Kingman business owners are counting on the Route 66 Festival to bring in free-spending tourists that will fatten their profit margins.

Scott Rhoades is opening The Cellar Door on Beale Street at noon instead of 4 p.m. during the festival and will remain open on the afternoon of Aug. 17, a Sunday. He'll have live music every night.

"I'm looking forward to it," he said. "It's going to be a boost for downtown and for the whole community."

Most patrons at The Cellar Door are local residents meeting for a glass of wine or beer, but a few foreign tourists wander in now and then, Rhoades said.

"We managed to get placed in a couple of French tour guides. It's shocking to see," he said. "Just being in a place that has air conditioning close by, I think people will be looking for a break from the heat."

Thunder Rode, a motorcycle accessories shop that recently opened at Beale Street and First Street, is scheduling its grand opening to coincide with the festival.

Liz Carpenter is stocking shelves at Remember When antique store with Route 66 items and encouraging vendors to bring things that will generate more sales. Anything with the Harley-Davidson Motorcycles brand will go fast, she said.

"It's going to be great for Kingman," said Carpenter, who's lived here five years and owned the store for 2½ years. "We were in Joplin (Mo.) last year when they were getting ready for the festival. Joplin's in the middle of nowhere. We're so centrally located near Las Vegas, Phoenix, Los Angeles. We're really excited about it. Ever since we heard of it, we've been planning for the store."

Betty and John Marvel of Colorado were "junking" at Remember When on their way to California, just as they've always done along Route 66. The people they meet are friendly and it reminds them of traveling as children.

"I've heard about this festival," Betty Marvel said. "I've heard people from all over the world come and it surprised me that so many people are aware of Route 66."

Kingman has about 1,700 motel rooms and there's a good chance for 100 percent occupancy, said Dora Manley, director of the festival. Four motels are completely booked, three are close to full and others are filling fast, she said. They're getting calls from international Route 66 associations taking blocks of rooms at a time.

"That's heads-in-beds taxes," Manley said during an interview in her Chamber of Commerce office. "The restaurants and bars have taxes. This is going to be something that's economically huge for Kingman."

Business owners have supplied the Chamber of Commerce with information for a flyer telling people what to look for on a walking tour of downtown.

In addition to the business aspect, the International Route 66 Festival has created a sense of community in Kingman, the festival organizer said. Everyone feels "connected" and volunteer committees are "going at it frenetically," she said.

"People think it's great that Kingman is getting special attention and doing something special to recognize Route 66 and they're realizing the economic potential," Manley said.

For a complete list of festival activities, go to www.route66kingmanfestival.com.