Parking will be an issue for Kingman festival 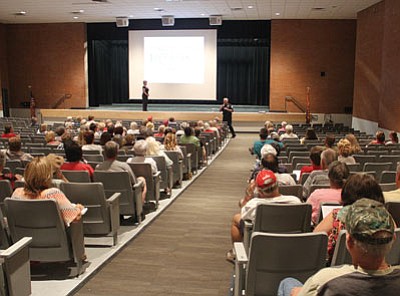 Organizers hoped to fill the Lee Williams High School with potential volunteers Tuesday, but more than 100 people did show up. (JC AMBERLYN/Miner)

KINGMAN - Parking is going to be a challenge for the International Route 66 Festival coming to downtown Kingman in two weeks, the festival director said Tuesday evening at a meeting for volunteers.

Route 66 will be closed early on the morning of Aug. 16, a Saturday, from Fourth to Sixth streets and from First to Fourth streets with two volunteers stationed at each closure point directing traffic to nearby parking lots.

Kingman Area Regional Transit will be running shuttle routes from downtown to parking lots at Staples and Wal-Mart on Stockton Hill Road and the Mohave County Fairgrounds free of charge to residents and tourists.

"We're doing the best we can to find places to park," director Dora Manley said.

Kingman Police Chief Robert DeVries cautioned volunteers to stay out of the way of traffic. Volunteers will wear neon-green T-shirts, so they'll be easily recognizable by festival goers, but also easy targets, the chief said.

About 125 volunteer workers attended the meeting held at Lee Williams High School auditorium. Some of them represented groups such as Kingman High School Robotics and Sharpshooters, who will be sending kids around downtown to keep it clean.

Manley said she's looking for volunteers for all events, from the meet-and-greet with Route 66 artists, authors and collectors on Aug. 15 to cleanup on Aug. 17. They'll work two- and four-hour shifts.

Volunteers are needed to staff the information booth at Locomotive Park and count the number of people going to the electric car museum, the Powerhouse and the Route 66 symposium.

Others will conduct surveys of where people came from, where they're staying, how much they plan to spend and other information that can be fed to the Tourism Development Commission.

"TDC gave us $20,000 and they want to know the return on their marketing dollars," Manley said.

Volunteers will also help with the Route 66 Film Festival at the Old Elks, Beale Celebrations, the Volkswagen car show at TNT Auto Center and Chillin' on Beale car show Aug. 16.

One of the volunteers asked if Route 66 Festival programs will be available at local motels and restaurants.

Manley said Grand Canyon Resorts printed about 5,000 programs and they will be placed at TNT Auto Center, Powerhouse and an information booth at Locomotive Park. Any extras may be delivered to motels, she said.

"Anytime someone asks you a question you don't know, send them to the information booth," she said.

Chicago Title is sponsoring a concert at Locomotive Park on Aug. 14, and Redneck's BBQ is hosting a concert Saturday night. A concert by Reunion, with two original members of The Lettermen, is slated for Aug. 16 at Lee Williams High School auditorium. Tickets are $20.

A schedule of events and activities can be found on several websites, including www.route66kingmanfestival.com, www.gokingman.com and www.route66news.com.