Reel Watchers: A Million Ways to Die in the West 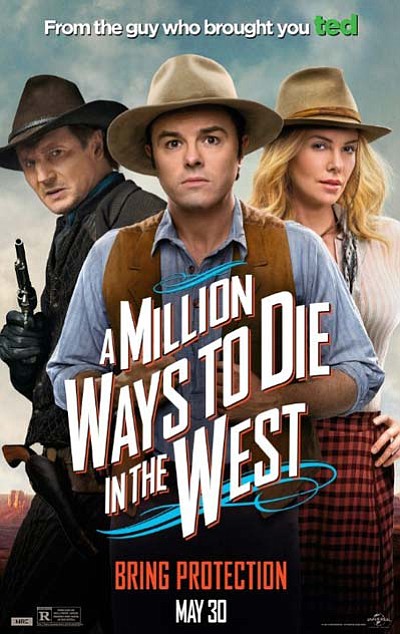 A Million Ways to Die in the West

Seth Macfarlane wrote, produced, directed and stars as the leading character in this barely slapstick comedy about the old West. It's set in late 1800's Arizona and even mentions Bullhead early on in the film.

There are quite a few well known stars playing minor characters but the one that really shines is Charlize Theron. Her character is what really made the film. No, we don't actually learn of a million ways to die, although there were some unusual end of life mishaps like a photo flash, raging bull, a large ice cube, and of course the typical, old West cowboy shootings.

The comedy was sketchy at best. It was more like a shotgun approach where 100 jokes were told but only a handful actually produced laughter. You won't be holding your sides laughing at any point in this film. It was slapstick in a Mel Brooks fashion. Mel Brooks, however, didn't inundate you with jokes and irony. Macfarlane's character was mundane and didn't stir an interest to see how the character developed.

I did laugh when Macfarlane's character was facing a duel in front of the whole town at the beginning of the film.

It's a two-hour movie where every possible joke is thrown at you, from situational comedy to trying to get laughs from human and animal excrement. The "F"-word is way overused and the movie deserves it's R rating. This is not a family film and really stretches the definition of comedy.

If there weren't outstanding characters supporting the film it wouldn't rank the two out of four miners I give it.

Caution: 'Ted 2' may gore your ox
For what it is, new 'Max' is pretty good
Huntsman prequel-sequel just doesn't work
Some will find 'Dumb and Dumber To' is just dumb
'Scouts Guide' is zombie apocalypse fun - for the right audience