Arnold Plaza still a thorn in county's side 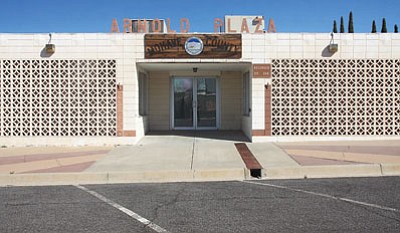 JC AMBERLYN/Miner<BR> The Mohave County Board of Supervisors will consider options for Arnold Plaza during a meeting at 9:30 a.m. Monday in the Mohave County Administration Building, 700 W. Beale St.

KINGMAN - The future of county-owned Arnold Plaza will once again be on the agenda Monday when Mohave County staff seeks direction on what to do with the dilapidated structure.

After the third unsuccessful attempt June 16 to find a bidder interested in buying the building, the Mohave County Board of Supervisors will decide the next step in the five-year journey to getting rid of it, one way or another. The board can reappraise it based on lack of interest, paint it and put a new roof on it, remodel it, demolish it or do nothing with it.

"I say leave the building there just as it is," said board Chairwoman Hildy Angius, District 2. "I don't want to put any more money in it. I'm confident some smart developer will come in and see the value of it, especially as the economy gets better."

Arnold Plaza, owned by the county for more than 25 years, has been in mothballs since the Mohave County treasurer's and assessor's offices moved out in 2005. According to the appraiser's report, the building needs a new roof, ceilings, carpet, doors, windows, lighting, bathroom fixtures, heating/air conditioning units and a coat of paint inside and out.

The board decided to demolish the building several years ago, but the county ran into problems with the demolition contract in 2012 and ended up throwing it out. The new five-member board, which took office in January 2013, asked county staff to re-examine the situation and provide the board with all options for getting the property off their hands.

The county building, located at 301 and 303 Oak streets, received no bids when the Mohave County Board of Supervisors first placed it on the auction block in October. The bidding started at $65,000 for the 23,000 square foot dilapidated commercial building situated in the heart of downtown Kingman, which is the building's appraised value.

There also were no bids again in April, even though four interested buyers inspected the property in February and March. Two of them were no-call, no-shows on bidder day, said Annie Newton-Fruhwirth, director of the Mohave County Procurement Department.

The other two called and said they would not be able to make it due to extenuating circumstances. Mohave County Administrator Michael Hendrix said last week's auction took place because the board thought there still might be additional interest in the building.

"I wasn't sure whether someone else would show up there to bid on it," said Hendrix. "There was some indication there still was interest in it, but it didn't materialize. So we're going to bring the building back before the board for more direction."