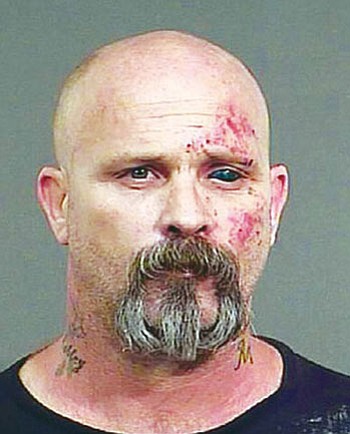 That day, Rivera drove down Valentine Street in Kingman, where Gerenscer lived. The victim, his brother and his father were standing in the street.

There was bad blood between the two families, with Rivera's stepdaughter at the center of the dispute.

He struck Gerenscer at a high enough rate of speed to knock the victim's shoes 30 feet from where his body landed. Rivera then turned around his Cadillac and ran over Gerenscer a second time, dragging his body more than 50 feet.

Rivera allegedly attempted to strike Gerenscer's brother and father before he fled the scene. He was arrested at his home on Suffock Avenue a short time later.

In a lengthy hearing Friday afternoon, prosecutor Bob Moon and defense attorney Stephen Duncan sparred over several issues, but there was confusion over what defense theory Duncan might employ at trial: Was the fatal hit and run an accident or self-defense?

"I have to admit, when I think about the defendant deliberately running over the victim, if it's self-defense, that's what you have to do," said Conn.

Gang affiliation - and whether the victim and his brother and father belonged to one - was another hotly debated topic, insofar as what might be revealed at trial.

Duncan insisted the victim and his family belonged to a California gang known as SGV in Baldwin Park, Calif., named for the San Gabriel Valley, but Moon said there is no evidence Gerenscer was in a gang.

He acknowledged the victim's father might have been a gang member years ago. The victim's father was at the hearing and, when court ended for the day, he told Moon he had no idea what Duncan was talking about.

Duncan said the men were flashing gang signs when Rivera first drove through. Moon said there is no doubt the men taunted and challenged Rivera that day, but said the hand gestures weren't gang signs, but they might have been flipping him the bird.

"The evidence will show the two families did not like each other," said Moon.

The evidence will also show Rivera has a temper. Moon played phone conversations that were recorded in jail. In one of them, a furious Rivera repeatedly said he was going to "f--- up" the county attorney. On another, he said he would "catch another murder" rap when he learned a relative of Gerenscer's was also in the Mohave County jail.

In yet another conversation, he said he was protected in jail by a reputed member of the 18th Street Gang in Los Angeles, considered that city's largest and one of its most violent, with members suspected in hundreds of killings over the years.

If convicted of first-degree murder, Rivera could receive a life sentence.