The Kingman Police Department is losing veteran officers
Better compensation is No. 1 goal for chief 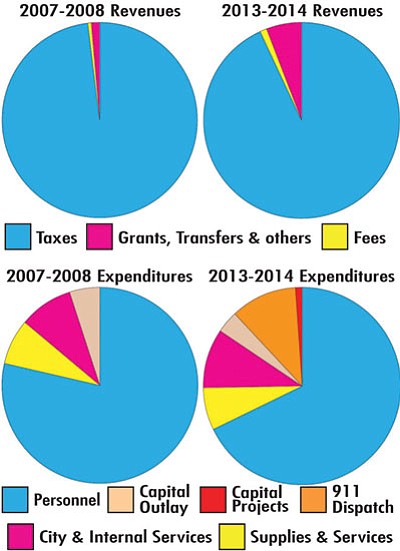 KINGMAN - Because of lower compensation, the Kingman Police Department is becoming a "training ground" for other law enforcement agencies and is having a hard time holding on to experienced officers, Police Chief Robert DeVries said.

One officer has already left the department to take a position with another law enforcement agency and three more are in the process of moving on, according to DeVries.

As a result, DeVries told Mayor Janet Watson and the City Council at a budget workshop Friday that increasing compensation is easily his number one priority heading into fiscal year 2014-2015 that begins July 1.

There are four cadets training at the academy to replace the veterans, but DeVries said attrition means about 80 percent of the more than two dozen patrol officers have less than five years experience.

"We have very solid officers out there, but they deal with critical situations," said DeVries. "It puts stress on them and the entire force.

He also said the lower salaries have prompted veterans to leave for other law enforcement agencies that offer more attractive employee packages.

"That's dangerous," said DeVries. "It just isn't a good situation for us."

While DeVries' short- and long-term budget priorities cover a number of issues, he said his other top needs after officer compensation are safety equipment for detectives such as tactical entry vests and ballistic helmets, followed by vehicles.

The protective gear currently in use "has no value whatsoever," said DeVries, particularly the helmets officers use when serving search warrants or conducting raids.

DeVries said more and more, his officers are confronted with suspects who install surveillance cameras outside their properties.

The current vests are not capable of stopping rifle rounds, but the ones he requested can, he said. The cost for the entry vests would total about $20,000.

The helmets in use are obsolete and in disrepair, said DeVries. His plan is to purchase 56 of them at a cost of $30,000 over the next two fiscal years.

Six of the department's vehicles are between seven and nine years old and have or are nearing the 100,000-mile mark.

DeVries said he would like to replace them with Ford Interceptors. However, he also said when the decision was made to purchase the Fords, they were $2,000 less expensive than the Chevrolet Tahoe. The price difference has since shrunk to about $300 due to the Interceptor's growing popularity.

DeVries also said the department seeks drug cash forfeitures from a court in order to purchase two four-wheel-drive vehicles for drug officers. If the money is awarded, he said, the city wouldn't have to dip into the general fund.