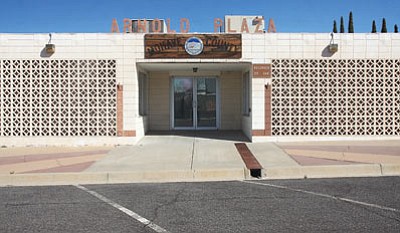 No one bid the last time the Arnold Plaza building was put up for auction, but Mohave County has heard from at least one potentially interested party. (JC AMBERLYN/Miner)

KINGMAN - After a failed first attempt in October, the Arnold Plaza building is up for auction again and county officials are hoping renewed interest in it will lead to its sale.

"We're hoping to get better results this time," said Supervisor Steve Moss, District 5. "Three weeks ago, we got a letter with an offer to buy the building at appraised value. We're required to have a public auction to sell it, so if this man was serious, he will show up, make an offer and it will sell. We've also had other interest in it. There's value in the building and we're hoping someone else can use it."

The Daily Miner requested the letter, but a county official said state law allows the letter to remain confidential until the building is sold.

The county building, located at 301 and 303 Oak Street, received no bids when the Mohave County Board of Supervisors placed it on the auction block last year. The bidding started at $65,000 for the 23,000 square foot dilapidated commercial building situated in downtown Kingman.

The public auction will take place at 10 a.m. April 7 in the Mohave County Administration Building auditorium, 700 W. Beale St. All interested bidders must register prior to the meeting, beginning at 9:15 a.m., at the auditorium entrance. Complete contact information and confirmation of funds by bank letter or its equivalent is required during registration.

The property will be sold "as is" to the highest bidder, with the opening bid starting at $65,000 - the building's appraised value.

Arnold Plaza, owned by the county for more than 25 years, has been in mothballs since the Mohave County treasurer's and assessor's offices moved out in 2005. According to the appraiser's report, the building needs a new roof, ceilings, carpet, doors, windows, lighting, bathroom fixtures, heating/air conditioning units and paint.

It also contains an unknown amount of asbestos and mold. Because of its condition, the building is not currently habitable.

The board decided to demolish the building several years ago, but the county ran into problems with the demolition contract in 2012 and ended up throwing it out. The new five-member board, which took office in January 2013, asked county staff to re-examine the situation and provide the board with all options for getting the property off their hands.

"We want to make absolutely sure that if anyone has any significant interest in the building, they get a chance to bid on it," said Supervisor Gary Watson, District 1. "I've done everything I could to rectify this situation over the years, including trying to tear the building down, but I was stopped. This new board doesn't want to spend anything more on it. So we're putting it up for auction again."