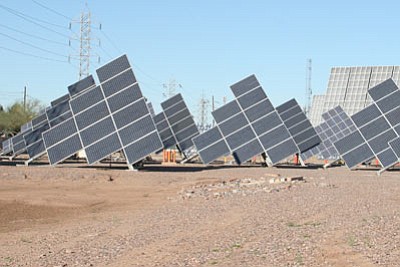 PHOENIX - Energy-efficiency requirements, rules on auto-emissions and policies promoting renewable energy helped Arizona prevent 3.5 million metric tons of carbon dioxide from entering the atmosphere in 2012, according to a report by an environmental group.

However, Bret Fanshaw, state advocate for Environment Arizona, said the state should be doing even more to curb greenhouse gas emissions.

"I think it's a great start, but the writing is on the wall: Arizona should be looking for more ways to reform," he said.

The Environment America Research and Policy Center assessed clean-energy initiatives and greenhouse gas emissions in each state to develop its estimates.

Of Arizona's total, the report attributed a savings of 2.18 million metric tons of carbon dioxide to energy-efficiency requirements and standards, while it said clean-cars programs and renewable-energy policies were responsible for savings of 720,000 and 630,000 metric tons, respectively, during 2012.

Sandy Bahr, director of the Sierra Club's Grand Canyon Chapter, said the growth of solar panels on Arizona homes is helping cut down on carbon emissions.

"Arizona's No. 1 priority is solar energy," she said. "Our best natural resource is the surplus of sunny days."

The Arizona Corporation Commission has required utilities it regulates to generate at least 15 percent of their energy from renewable sources by 2025.

State Sen. Chester Crandell, R-Heber, who authored a bill this session that would prohibit local governments from requiring energy efficiency, energy conservation or green construction in new buildings, said he doesn't give the study much credit because he sees no conclusive evidence of global warming.

"It's a ploy to make money," Crandell said. "Without carbon dioxide our plants will suffer. It's an important part a plant's life cycle."

Bahr said conservative state lawmakers have blinders on when it comes to the environment.

"Our legislators have their heads in the sand and don't recognize the authority of the federal government or the Environmental Protection Agency," she said. "As a result, our environment and economy suffer."

Fanshaw said global warming is intensifying the state's summers and drought, making it important to address significant sources of greenhouse gas emissions such as power plants.

"Limiting carbon pollution from power plants would build on Arizona's success," Fanshaw said. "People are becoming little power plants with their solar panels, and that's the future that I want to see."