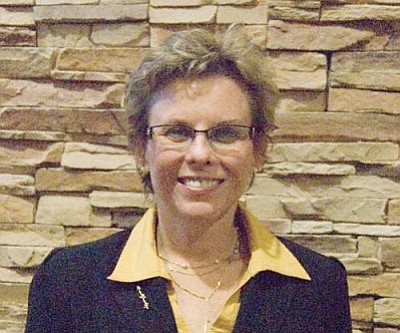 KINGMAN - When the Arizona Game and Fish Department says they worked in cooperation with Mohave County to temporarily re-open the Willow Beach National Fish Hatchery this year, they mean in large part Supervisor Chairwoman Hildy Angius.

The re-opening of the hatchery this summer means roughly 21,000 juvenile rainbow trout will be replenished to the Colorado River recreational fishing spot.

Facing significant losses to Mohave County's economy, Angius made the cause her own and fought to re-open the hatchery.

With more work still to be done, and a long-term solution still to be put in stone, county officials say Angius' efforts are a major reason why the hatchery is open today.

"I categorize her efforts as a tremendous success at this time," said County Administrator Mike Hendrix. "I know she's passionate about that, and trying to do what is best for Mohave County's economy, and Mohave County in general. You have to attribute any success to that issue to Hildy, because she is a real passionate, and effective advocate."

Angius said the effort to restore the hatchery began in February, and would ultimately take her to Washington, D.C.

"There was an oversight committee," she said. "I testified at a House Appropriations Committee. There was a lot of political and policy pressure involved."

Arizona Game and Fish also stepped up to the plate in a major way, said Hendrix.

"They're going to be providing trout to the hatchery, and raise them until they're large enough to release," Hendrix said. "There is a limited window of time for that to occur, but they will be stocking the Colorado River."

Last November, the hatchery - operated by the U.S. Fish and Wildlife Service - conducted an emergency stocking of 11,000 rainbow trout when the low water level made it impossible to draw water.

The hatchery, however, lost 20,000 fish due to a lack of water movement through the system, the agency said. Since then, USFWS says the hatchery has been unable to rear or stock sport fish.

The hatchery has not actually been closed, USFWS Southwest Region officials say, but state officials say it nearly came to that.

Despite the hatchery's pipeline and infrastructure damages, the latest solution will accommodate short-term angling as the agencies work towards a long-term solution to supply trout for recreational fishing in Arizona.

In early fall, piping used to bring cold, fresh water into the hatchery was clogged with vegetation. As a result, more than 40,000 rainbow trout were lost.

This was a main reason Bureau of Land Management gave for closing the hatchery, Angius said.

Repairing the intake pipes needed to keep fresh water coming into the hatchery was estimated to cost $2.5 million, so the decision was made to close the hatchery to raising cold-water fish, effectively ending trout production at the facility.

The Fish and Wildlife Service shorted operations at the hatchery without an economic impact study conducted for either Mohave County or Game and Fish, department officials say.

Concerns were quickly raised regarding the economic impact the BLM's decision would have for tourism along, and residents of the river communities.

Chris Cantrell, the fishery's chief for the Arizona Game and Fish Department, said at the time the department had similar concerns, particularly for Willow Beach anglers south to the Bullhead City area.

Without stocking efforts, rainbow trout will not be consistently available long-term, Cantrell said.

The Arizona Game and Fish Commission remains opposed to a reprioritization of National Fish Hatcheries by USFWS and will continue to work toward ensuring that the USFWS fulfills its commitment to support sportfishing in Arizona and across the nation, the agency said.