Editorial: From deep space to the sausage factory 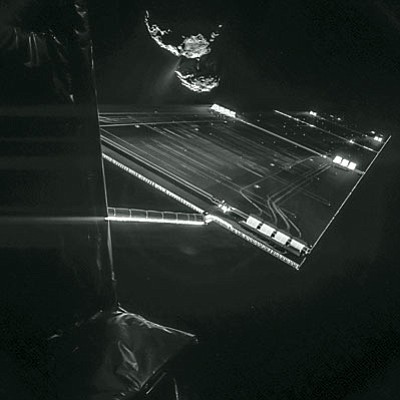 Space. The final frontier. These are the voyages of the starship Rosetta, and its satellite craft, Philae. Their 10-year, 4 billion-mile mission - to land on a comet.

Sure, no problem. Just land on a ball of ice and cosmic dust that's traveling 41,000 mph, 311 million miles from our puny little planet.

That's boldly going where we ain't been before.

Of course, mission accomplished doesn't mean that the mission that was accomplished is the same as what was intended when the mission's accomplishments were envisioned. A lot of things went wrong, from missed opportunities to the landing, which placed Philae in the shadow of a cliff so that its solar panels are largely blocked from the sun.

But human beings landed a ship on a comet!

Vision, teamwork, hard work, technical know-how and a little luck came together to achieve something great.

What a contrast to our national conversation, which is full of people who are saying things they don't mean about issues they don't intend to address.

Pick a topic - the Affordable Care Act, Social Security, immigration, net neutrality, highways, rail infrastructure, whatever - and the fixes already exist. There will be disagreement, and alternatives, and debate, but that's how our system is supposed to work.

The system's not supposed to be an exercise in gridlock and political point-scoring in which the best our lawmakers can do is pass stopgap measures and temporary fixes that don't move anything forward, and barely keep the status quo functional.

Look at it this way - if Congress were in charge of the Rosetta mission, it'd be stuck in committee as they wrangled over which comet it should land on, what data to gather, whether the cost of the mission should be offset by cuts elsewhere in the budget and whether the money ($1.7 billion) would be better spent on something else.

And, these days, there'd probably be someone in Congress arguing that studying comets is stupid because the universe is only 6,000 years old and comets can't become followers of Jesus Christ, so let them melt with the rest of the sinners when Revelations comes true.

I don't expect Congress, or any legislative body, to turn on a dime. The process is deliberative for good reason.

I've had the ambiguous fortune of covering state legislatures in two states, and one of the commonalities I've observed is that even solid, thought-through legislation takes three to five years to pass. That's not a bad thing; you've got to work the kinks out of legislation.

If that's not happening, it's ultimately up to us to get people in place who will engage with a solution, and make it so.