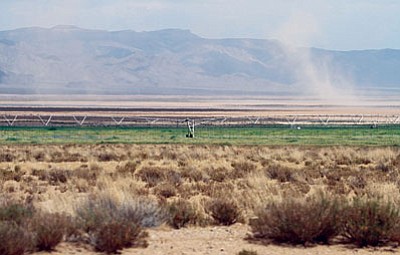 JC AMERBLYN/Miner<BR> A dust devil swirls over recently tilled soil north of Kingman in July. Kingman Farms’ activity in the area as well as in Golden Valley sparked dust complaints that the Arizona Department of Environmental Quality responded to last week.

KINGMAN - The Arizona Department of Environmental Quality received several complaints about dust in the Golden Valley area and responded Thursday with an inspection and recommendations for Kingman Farms.

Mark Shaffer, spokesman for ADEQ, said the inspection report showed that Kingman Farms had planted and irrigated only half of its alfalfa fields and is expecting to have the other half watered by the end of the week.

The report by ADEQ inspector Mike Smith recommended that Kingman Farms minimize time between tillage and irrigation to prevent fugitive dust from unstabilized fields and to minimize the number of acres tilled at one time. Photos from his report showed fugitive dust on one side of the field.

"My wife is on oxygen and she can't go out on the patio because of the dust," Golden Valley resident Tom Kuhlman told the Daily Miner. "We're on the edge of the valley. I feel sorry for the people down in the middle."

According to Agricultural Best Management Practices general permit record, significant earth-moving activities should be conducted as close as possible to irrigation activities or otherwise stabilize the soil.

Kingman Farms has 400 acres planted for alfalfa production, the report stated. Drip tape irrigation system should have all 400 acres watered by the end of the week, Kingman Farms general manager Dirk Griffith said.

Kuhlman said Kingman Farms should be fined for dust control just as construction sites are.

ADEQ has inspected complaints toward both agriculture and construction activity in Mohave County and worked on a collaborative approach to mitigate emissions with both industries, Shaffer said.

"We know of no enforcement action resulting in financial settlements with the construction industry in Mohave County regarding dust emissions," he said. "But the rules for agriculture dust emissions are different than they are for construction."