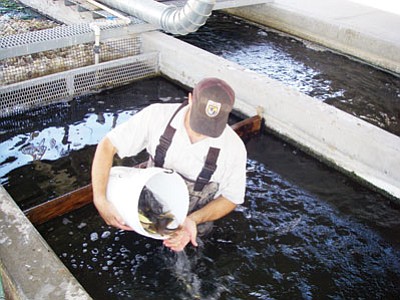 ARIZONA GAME & FISH/Courtesy<BR> A worker at Willow Beach Fish Hatchery empties a bucket of small fish into a pool where they will grow larger until released. Arizona Game and Fish Department plans to release 22,000 trout into the Colorado River in October and November.

The first of four stocking events is scheduled for 11 a.m. to 3 p.m. Saturday at Camp Davis. Others will take place at Camp Davis and Rotary Park.

It's the first stocking of trout raised at the Willow Beach Fish Hatchery in nearly a year.

The U.S. Fish and Wildlife shut the program down in November 2013 because of low water level and damage to an intake pipe from Lake Mohave.

These problems, along with federal budget cuts, resulted in the closing of the sport fish program at Willow Beach hatchery. In July, Rep. Paul Gosar, R-Prescott, introduced the Fish Hatchery Protection Act stipulating that only Congress can authorize termination of such facilities and programs.

The number of fish being released in October is roughly equivalent to the number that would normally be released from October through May, said Matt Chmiel, Arizona Game and Fish manager in Kingman.

The trout started out at Arizona Game and Fish's Page Springs hatchery and were trucked to Willow Beach when they were 6 inches to 7 inches long, Chmiel said. They're being released at about 13 inches.

Timing of the release is critical, the fishery manager said. The trout must be in the river before water levels drop below the intake valve.

The trout stocking will improve chances for fishermen in the Bullhead City and Willow Beach areas to have a good day with their catches.

"While fishing in the area has remained strong, trout have been recognizably absent for nearly a year," Chmiel said.

In addition to recreational pastime, fishing brings steady business to many communities along the Colorado River. More than 255,000 anglers spend an estimated $831.5 million on equipment and trip-related expenditures each year in Arizona, including $30 million in Lake Havasu City, according to Arizona Game and Fish.

John Saulsbury, manager of Big 5 Sporting Goods in Kingman, said he'd heard about the trout stocking program at Willow Beach, but it really hasn't affected business one way or the other.

"We just have two aisles (of fishing equipment). We sell a lot more hunting firearms," he said Monday.

The store sells beginner rod-and-reel sets for about $20, as well as fishing licenses through Arizona Fish and Game for $37.

The Kingman company manufactures fishing hooks and lures for wholesale distribution to retailers.

"I haven't heard anybody say anything about it," she said. "They mostly go to the lake for bass and bigger fish."

Sen. John McCain, R-Ariz., toured the Willow Beach hatchery in August and was briefed on a variety of engineering plans to restore operations, with some options estimated to cost up to $9 million.

Federal and state wildlife officials have since agreed to a proposed solution calling for construction of a floating pump platform assembly at an estimated cost of $776,448.