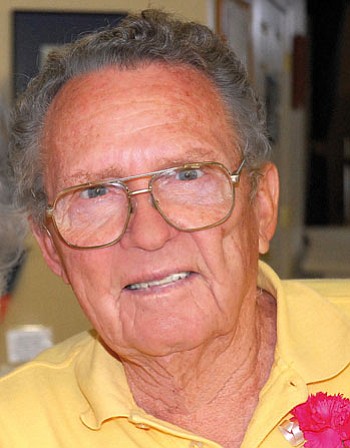 Jack Dempsey Miller, named after a championship boxer but known to his family and friends as John D. Miller, passed away Sept. 5, 2014, at the age of 84. Beloved husband, father, brother, grandfather, great grandfather, U.S. Army Korean War veteran, and longtime friend and resident of Kingman, he was born on a dairy farm in Bryan, Ohio.

He loved all things aviation resulting from winning a plane ride. At age 15 he became the youngest certified pilot in the state of Ohio, allowed by special permission from what is now the Federal Aviation Administration. After moving to Los Angeles, he opened an automobile upholstery shop and soon met the love of his life, Alice Sue Convery. He gave her a plane ride over the city Los Angeles and their relationship blossomed. They married but had to leave soon after for an Army tour in Korea and Japan, as he was a munitions expert. While in Japan he developed an interest of photography, which remained with him his entire life.

After his short Army tour, John and Alice started a family and moved to Chicago so that he could begin his new job. They raised three children in suburban Lombard, Ill. He commuted 20 years to his downtown job at Harris Trust and Savings Bank and continued his passion for photography, eventually building a color processing and printing lab in his home - a rarity in the 1960s. His passion for playing musical instruments began so after. He frequented music stores in Chicago, bringing home a variety of musical instruments that he and family members would play, if only for a weekend. Later he acquired Wurlitzer and Hammond B3 concert organs, which became a central part of family life. He had a home woodworking shop and created marble inlaid tables, wooden bowls, windows and much more. He obtained his advanced flight instrument rating and his thousands of hours of recreational, private flying from the Chicago area included trips all across the U.S., including Florida, the Bahamas, Arizona, and California.

In 1977, the Miller family moved to Kingman. He built a beautiful ranch home and ran a satellite dish installation company. He and Alice became avid motorcyclists, touring the U.S., Mexico, and Canada, and were members of the Route 66 Riders Club. Later they toured the U.S. full-time by motor home.

John was artistic and painted beautiful and creative western scenes. As a self-taught computer enthusiast he built his own computer from parts he acquired while vacationing in Tokyo, Japan. He maintained several personal and professional websites for many businesses and organizations, including the Route 66 Riders, Veterans of Foreign Wars Post No. 10386, Kingman Quilters Guild, the Kingman Patriot Guard and others.

He volunteered much of his time to the VFW post and was Grand Marshal at the 2008 Veterans Day Parade. He never hesitated to volunteer his time and skills to those who needed it.

He is survived by his wife of 64 years, Alice Sue Miller; his three children, Steven Miller (Ada) of Guadalajara, Mexico, Susan (Steve) Eiselt of Las Vegas, and Mary Jo Bair (Fred) of Tucson; his grandchildren, Tiffany Walker (John), Allison Bair, Madeline Bair; and his great-grandson, Jack James Walker. He is preceded in death by his 102-year-old mother-in-law, Jo Lela Convery, also of Kingman.