Mohave gets first win of season against LWHS 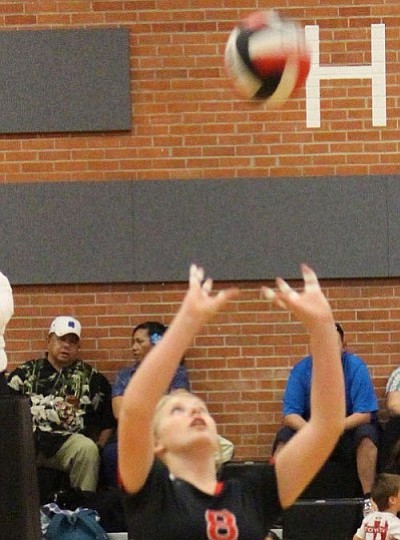 KINGMAN - After giving off signals that showed the team was growing and maturing, the Lee Williams volleyball squad faltered as Mohave won its first match of the regular season Wednesday at LWHS 25-18, 25-20, 25-7.

"The girls can't figure out how to bring themselves back after getting down," said LWHS coach Traci Rosenbach. "They have to figure that out on their own because I can't always call a timeout to help them with that."

Lee Williams (5-4) did claw back in the opening set after falling behind 8-2. The Lady Vols worked hard to get things tied at 17, but Mohave (1-10) won the next six consecutive points en route to the win.

Things were pretty even at the start of the second set when Lee Williams clung to an 8-7 lead. Another T-bird run, this time it was five consecutive points, allowed Mohave to get to the 25-20 win and lead the match, 2-0.

The Lady Vols never were in the third set as Mohave reeled off 11 consecutive points from the start behind Natasha Radic's serving.

"I felt like our freshmen stepped up," Rosenbach said. "There were moments when we played really well, but the momentum kept changing and we couldn't keep it on our side."

Lee Williams hosts Kingman (5-7) at 6 p.m. Thursday in its next match.