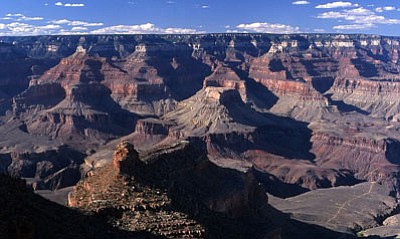 GRAND CANYON - A bat recently removed from an area along the Colorado River within Grand Canyon National Park tested positive for rabies.

All visitors to Grand Canyon, including those who are recreating in the backcountry and on the Colorado River, should be aware of their surroundings and alert to potential interactions with bats or other wild animals.  Those who are camping in the backcountry and along the river should strongly consider using a tent while sleeping to prevent any contact with bats or other wildlife.

As a precautionary measure, anyone who comes into contact with a bat should notify a park employee and see a health care provider as soon as possible. Rabies is preventable if medical treatment (called post-exposure prophylaxis or PEP) is given following exposure to a rabid animal, but is almost always fatal if PEP is not given prior to the development of symptoms.

Rabies is a serious disease that can kill both animals and humans. Humans usually get rabies through contact with an infected animal's saliva, such as a bite or scratch. All mammals are susceptible to rabies, including bats, skunks and foxes. In particular, rabies should be considered in animals that exhibit unusual or aggressive behavior or are not afraid of humans.

Grand Canyon National Park would like to remind visitors about the following things they can do to protect themselves from rabies:

• If you see sick or erratic-behaving wildlife, do not approach or touch it. Notify a park employee or call the park's 24-hour emergency communications center at (928) 638-7805.

• In areas where pets are allowed, make sure that pets are vaccinated and kept on a leash at all times.

• Teach your children to tell you if they were bitten or scratched by an animal.

• Anyone who has had contact with a bat or other wild animal in the park should notify a park employee as soon as possible.

• Visitors should observe and appreciate wildlife from a distance.

Rabid bats have been documented in all 48 continental states. Cases of rabies in animals are reported in Coconino County each year, including the two bats found positive earlier this year within Grand Canyon National Park.