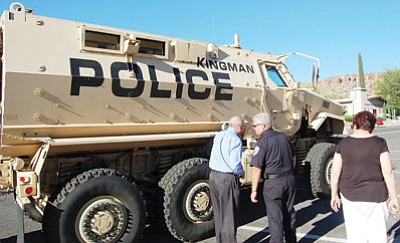 Police Chief Robert DeVries discusses the department’s newly repurposed armored vehicle prior to Tuesday’s City Council meeting as Mayor Janet Watson continues her review. The Department of Defense gave the $750,000 vehicle to the KPD at no charge. The money used to ship it from Texas and outfit it came from drug forfeiture money. (DOUG McMURDO/Miner)

KINGMAN - About a month after protests in Ferguson, Mo., sparked a national discussion on the government giving military surplus items to police departments in the U.S., the Kingman Police Department unveiled its repurposed Mine Resistant Ambush-protected vehicle at Tuesday's City Council meeting.

There is no turret on the roof. No gun ports drilled in the cabin. No grenade launcher, no .50-caliber machine gun or even a water cannon.

DeVries and Deputy Chief Rusty Cooper said they understand concerns raised by the incidents in Missouri, which began Aug. 9 when a white police officer shot to death an unarmed 18-year-old black man.

The Ferguson police initially responded in full battle armor with a vehicle similar to the MRAP KPD has, but it was clearly outfitted for a military purpose, including a rooftop platform to fire heavy-caliber weaponry.

DeVries said the $750,000 vehicle, obtained virtually for free through the Department of Defense 1033 Program, has been "fully equipped" for law enforcement purposes.

Mayor Janet Watson and a few Council members climbed into the MRAP prior to Tuesday's meeting.

DeVries said the idea behind obtaining the MRAP was for officer and public safety.

The armored vehicle had been completely refurbished prior to the KPD picking it up, including a new diesel engine.

No tax money was used in acquiring the vehicle. Drug seizure assets paid to have the vehicle shipped from Texas to Kingman and the work done to repurpose the MRAP has also come from drug forfeitures, said DeVries.