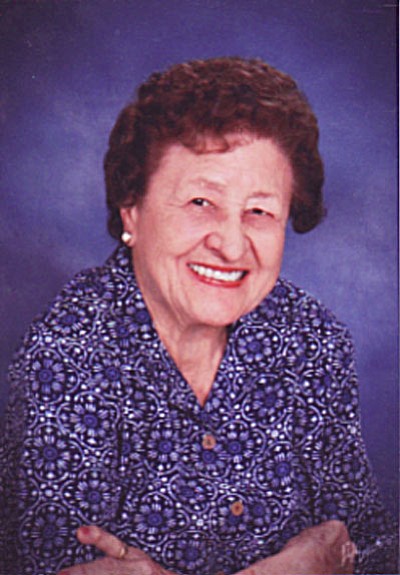 Ardith was the only child of James and Rose May Johnson and grew up on a farm near Talmadge, Kan. She did all the fun things, such as roller skating, piano lessons and hanging out with friends and cousins. She was the star pitcher on the Talmadge High School girls' softball team.

Upon graduating from Talmadge High School, she moved with her parents to Southern California, where she met and, after a respectable courtship, was engaged to Donald Walker. Then there was World War II and Donald joined the Army and was under Patton in the European Theater. Ardith and Donald were married in 1949 and resided in Westminster, Calif., where she worked for 40 years as a bookkeeper. After retiring in 1982, Ardith and Don moved to Kingman.

Ardith has faithfully served many years at College Park Baptist Church by being treasurer, singing in the choir, VBS, Flower/Decorating Committee and was a pianist for seven years.

Ardith was preceded in death by her parents and husband and is survived by nephews, nieces, cousins and many friends.

There will be a viewing at 10 a.m. Friday, Sept. 12. Following the viewing will be a memorial service to celebrate her life at 11 a.m. at College Park Baptist Church, 1990 Jagerson Ave., Kingman.