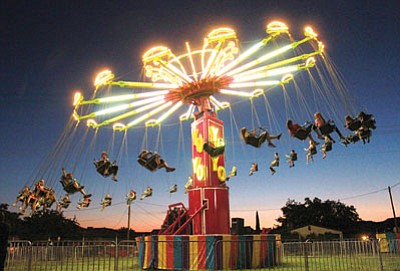 KINGMAN - The 68th annual Mohave County Fair is shaping up to be an event to remember, with an extensive lineup of shows, competitions and exhibits.

That's a good thing, considering this year's fair celebrates the 150th anniversary of the founding of Mohave County and is themed "A Fair to Remember." Jamie West, fair committee chairwoman of the Mohave County Fair Association, said it offers a wide range of activities to please attendees of all ages and interests, from horse and dog shows to bands and bicycle motorcross.

"This year's fair is the best bet for the entertainment dollar and a way for the whole family to have fun together," said West. "There is literally something for everyone. Instead of sitting at home in front of the television, come see a bunch of stuff you won't see the other 51 weeks of the year. This is the one chance get out and experience it all at bargain rates."

The fun includes the Gymkhana Horse Show/Event, which takes place at 4 p.m. Friday in the horse arena and includes barrels, speed poles, bow ties and butterflies. Another related event, the Open Horse Show, is scheduled for 9 a.m. Sept. 14, also in the arena. Participants will compete for high points in Western Horse/Rider, English Horse/Rider and Overall Horse/Rider.

The dogs will be out at 8 a.m. Sept. 14 in the Livestock Arena for judging in conformation, showmanship and obedience. And that's not all - breeds such as sporting, hound, working, terrier, toy, herding and mixed will compete for titles such as smallest, largest, best tail-wagger, best rescue, best costume, softest ears, prettiest, handsomest and owner/dog lookalike.

There's plenty to see when it comes to 4-H and National FFA Organization exhibits this year, said West, including pets, crafts, art, needlework and gardening. And 4-H members who raised livestock will be showing them to place and win during the fair in hopes of selling them for the best prices to buyers at the 4-H Livestock Auction at 6 p.m. Saturday.

Entertainment is always a big draw at the fair, and this year is no exception, said James Guillot, entertainment director and fair manager. Larry Cisewski is a performer from San Diego who throws hatchets at his assistant while she stands against a wooden board, holds a balloon against her mouth and is hidden behind a sheet. Cisewski, who has been in numerous movies requiring a knife-thrower, also is known for catching flaming arrows with his bare hands. He will be performing several times a day.

And for the first time in many years, the Mohave County Fair Battle of the Bands is back, said Guillot, with five area participants competing Thursday for a $1,000 prize. The bands are Dank, playing at 4:30 p.m.; Lakeside at 5:20 p.m.; Amnezia at 7:20 p.m.; Bulletville at 8:10 p.m. and Safewerd at 9 p.m. The competition will take place on the Midway stage.

Another addition to the entertainment lineup is the Enumclaw, Wash.-based group Aces Up, which plays a grunge-rock twist of hard-hitting, boot-stomping music. In addition to receiving national airplay with songs on their debut album, "Backyard Superstars," the band has shared the stage with well-known names like Uncle Kracker and The Band Perry. Aces Up will play at 9:40 p.m. Friday and Saturday on the Midway stage.

Other entertainment includes Mr. Animation Comedy, a street performer from Venice Beach, Calif., who will provide a one-man variety show three times daily on the midway, and Tucson-based Hypno Joe, a comedy hypnotist who will take the stage several times a day throughout the fair. Also, the Theater 16 Variety Show will provide magic acts during the day, as will Terrell & Takako, a juggling and comedy act.

Also, scramble car races are planned for 7 p.m. Friday and a competition of Tuff Trucks and Mud Bogs can be seen at 6 p.m. Saturday. Both take place in the arena. Tickets for the races are $3 for adults and free for those 12 years and under, and tickets for the trucks and bogs are $5 for adults, $3 for ages 6-11 and free for under 6 years.

"I think we have something for everyone this year," said James Guillot, entertainment director and the fair's manager. "I'm very excited about that. We're also trying to showcase local talent with our Battle of the Bands. We just want everyone to be happy."