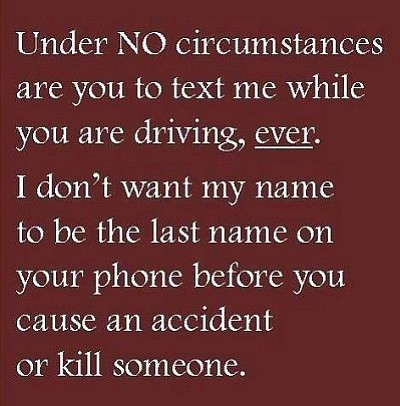 You're driving down the street and you spot the car in front of you weaving back and forth in the traffic lane. There are even times that vehicle in front of you drifts into the oncoming traffic. The driver appears to be operating his or her vehicle erratically. You think to yourself, "This driver must be drunk and they may kill some innocent person if they don't get off the road."

But when you pass the weaving car, you see the driver is using their cellular telephone to text or e-mail another person and/or is talking on it. The driver is concentrating more on their cell phone and not paying enough attention to operating that 6,000-pound hunk of steel they are driving. Yes, it is an accident just waiting to happen.

Why do people think they can multitask by driving a "legal instrument that can cause death" and use hand-held cell phones at the same time? Driving a motor vehicle takes the upmost concentration, and if you are doing something else in addition to driving, you're not paying enough attention to the road.

Thousands of people are killed each year by drivers talking on cell phones. According to statistics, cell phone distraction causes more than 2,600 deaths and 330,000 injuries in the United States every year. I know by me stressing this point, it is like the pot calling the kettle black. I am just as guilty as the next person and I am a prime example of what drivers should not do while operating a motor vehicle.

I have pulled out of my driveway, and in less than a half of block, I'm calling someone on my cell phone or sending them an e-mail. I never did say I was the sharpest tack in the box.

I've learned my lesson because I'm lucky I didn't become a hood ornament on a semi-truck a while ago. I was attempting to multitask while driving northbound on Egar Road in Golden Valley, sending an e-mail and traveling at approximately 45 mph. Was I paying as much attention to my driving as I should have? I can definitely say I was not? When I "blew over" the cattle guard on Egar just prior to Highway 68, I knew I could be in a lot of trouble or dead, because it was too late for me to slam on my brakes.

Yep, that's right. I drove right through the stop sign and completely across 68. Thank God there wasn't another vehicle traveling either westbound or eastbound. I could have killed myself or, even worse, killed someone else.

Numerous states have passed laws that prohibit the use of cell phones by drivers while they operate their vehicles. Our neighbor, California, has a law on the books that prohibits utilizing a cell phone unless you are using it in the hands-free mode.

There are five states in addition to California (Connecticut, New Jersey, New York, Oregon and Washington), the District of Columbia and the Virgin Islands, at last count, that prohibit all drivers from talking on hand-held cell phones while driving. With the exception of Washington state, these laws are all primary enforcement - a law enforcement officer may ticket a driver for using a handheld cell phone while driving without any other traffic offense being observed.

AAA is championing a 50-state campaign to pass laws prohibiting drivers from texting while behind the wheel. There are currently 18 states and D.C. that have enacted laws addressing this dangerous behavior. According to AAA, they will be actively pushing lawmakers to focus on the issue of drivers texting in the remaining 32 states.

Just because it isn't illegal in most of Arizona (some Arizona cities have banned texting and driving) to e-mail, text or use a cell phone and operate a moving vehicle at the same time, that doesn't make it any less dangerous. Even though there isn't an Arizona law prohibiting most motor vehicle operators from using cell phones while driving a vehicle, drivers can be cited for careless driving or failure to properly control their vehicle in a safe manner if they drive and use a cell phone at the same time.

What a law enforcement officer observes you doing (e.g.: illegal or unsafe lane change, driving off the roadway, not yielding to another driver or violating a traffic control device) will determine which Arizona Revised Statute you might receive a citation for.

Two statues that deal with failure to properly control your vehicle in a safe manner and careless driving are A.R.S. 28-693 - reckless driving; and A.R.S. 28-695 - aggressive driving.

Reckless driving is a Class 2 misdemeanor and carries a maximum punishment of suspension of driving privileges for 90 days. However, if this is the second offense within a 24-month period, it is a Class 1 misdemeanor and you may be required to serve not less than 20 days in jail.

Aggressive driving is a Class 1 misdemeanor and carries a maximum punishment of having to attend and successfully complete approved traffic-survival school training and educational sessions designed to improve safety and habits of drivers - and suspension of driving privileges for 30 days. But if it is your second offense within a 24-month period, you may have your driving privileges revoked for a one-year period.

And last but not least, if you are unlucky enough to have caused a motor vehicle accident while utilizing a cell phone and someone is killed, you could lose your driving privileges for five years in addition to any criminal charges you might receive.

Each of us must pay more attention while driving and not use our cell phones, other than in the hands-free mode. If you don't, you might become a statistic, or even worse, have your name in the newspaper article saying you killed a family of five that had been heading to church.

I don't know about you, but I've learned my lesson! When my cell phone chirps a tone indicating I just received an e-mail or text from someone, I now wait until I've stopped to check out the message. I'm sure it's not more important than my life or the life of someone else.

I really don't want to be the last text on your cell prior to you careening off the road, crashing and causing your death or the death of some innocent person.