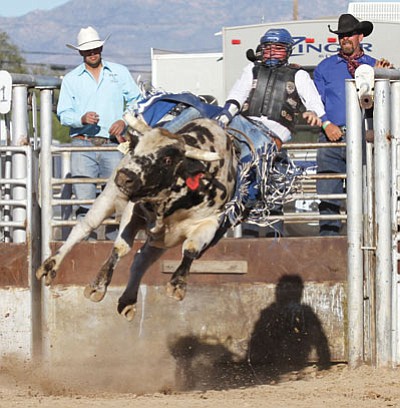 Will Rogers rides a bull in the 29th Annual Andy Devine Days Rodeo at the Mohave County Fairgrounds. (JC AMBERLYN/Miner)

KINGMAN - The 30th anniversary of the Andy Devine Days PRCA Rodeo promises to be a boot-stompin', hat-wavin', yahooing event for fans of the Western sport.

That's because this year, the audience will be up-close and personal with the horses, bulls and the cowboys who are eager to rope and ride them. The Kingsmen, a group of local businessmen who sponsor and promote the rodeo, will be bringing in a portable arena that will move the action much closer to the grandstand.

The rodeo is named after Andy Devine, an actor who played a sidekick to a number of Western movie stars such as John Wayne, Jimmy Stewart and Guy Madison. Devine grew up in Kingman and is probably best known for his role as Jingles in "The Adventures of Wild Bill Hickok."

This year's rodeo again features mutton-busting for children during each rodeo performance, as well as calf dressing, where teams of three or four participants chase calves and attempt to dress them in boxer shorts. The winners take home a belt buckle for their efforts.

Cullison said attendance at the annual rodeo has ebbed and flowed according to the economic times, and the Kingsmen have worked hard over the years to make it a success by offering new events and attractions, such as the portable arena being added this year.

"I think this year is an exciting time for our 30th anniversary," said Cullison. "It's going to be better and more appealing for our patrons, who have told us they want to be close enough to the rodeo activities to be able to smell the animals. So that's what we're giving them this year, and I think they'll like it."