Bends, glitches take a bite out of Apple's new offerings 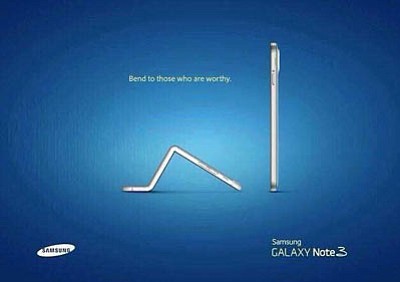 Competitors have used social media and ads, such as this one, to gleefully trumpet Apple's recent struggles. (Courtesy)

Apple has not had a good week in the wake of the iPhone 6 and iOS 8 launches. Software bugs and hardware problems have sent the company's stock reeling, dropping 3.88 percent on Thursday and losing nearly $23 billion in stock valuation since the launch of the iPhone 6 last week.

While this is only a dent in Apple's massive financial value (the company has nearly $160 billion in cash alone), the tech giant will have to deal with the public relations nightmare and competition ridicule for the months to follow.

The launch of the iPhone 6 also came with Apple's entry into the phablet market, the iPhone 6 Plus. Its 5.5-inch screensize is meant to compete directly with Samsung's popular Galaxy Note line, with the latest Galaxy Note 3 having sporting a 5.7-inch screen.

Apple's phablet came in thinner and lighter than its competitor, but that may pose a problem for the structural integrity of the phone.

Users are reporting that the iPhone 6 Plus is prone to bending and warping even with light daily use and resting in pants pockets. While Apple hasn't confirmed why this is happening, most of the bending occurs near the volume buttons on the body itself. The body is made of a single, carved piece of aluminum alloy, but Apple needed to cut into the body to make room for the volume buttons. Because of how thin the phone is, that hole has created a weak point in the chassis.

Apple reported that only nine customers have contacted the company about the problem, but multiple YouTube videos and Tweets suggest a much more common concern.

Competitors have already started taking jabs at Apple's expense, with Samsung leading the charge and capitalizing on "Bendgate."

An ad posted this week shows the iPhone 6 Plus bending in front of a Galaxy Note 3 with the caption "Bend to those who are worthy." A tweet with a picture of the Galaxy Note Edge, a phone with a screen that wraps around one side, reads "Curved. Not bent."

Other companies such as KitKat, Heineken, Slim Jim, and Burton Snowboards have joined in on the #bendgate fun through tweets of their own.

Regardless of how widespread this issue is, Apple will be looking at an expensive fix for users affected. The iPhone 6 Plus starts at $749 off-contract. The iPhone 6 and 6 Plus collectively sold over 10 million units since its release last Friday, eclipsing the last iPhone's release by over a million units.

Apple's newest mobile operating system, iOS 8, released last week ahead of the iPhone 6 launch with mixed reviews. While the new iOS does add a slew of new features that developers and users can utilize, the iOS has been crashing more often than previous versions.

It was the update released this week, 8.01, that kicked many iPhone 6 users off of their networks. Users were reporting that their phones with iOS 8.01 were showing "No Service" in areas that they previously had cell service.

The update also rendered the Touch ID sensor, the fingerprint reader inside the Home button, unusable.

The issue seems to only affect the iPhone 6 and iPhone 6 Plus, but that didn't stop Apple from pulling the update from all phones.

Apple released this statement shortly after:

"We apologize for the great inconvenience experienced by users, and are working around the clock to prepare iOS 8.02 with a fix for the issue, and will release it as soon as it is ready in the next few days."