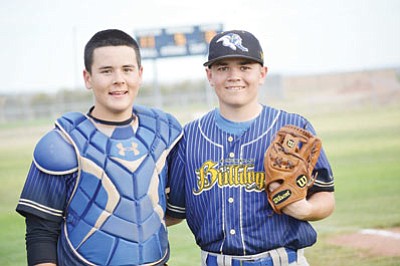 KINGMAN - Ricky Ogborn faced just one batter above the minimum while throwing a no-hitter during Kingman's 11-0, 10-run mercy-rule win in five innings at Parker Tuesday.

"We played solid all around," said KHS baseball coach Chad Baitinger. "No physical or mental errors."

The win gave Kingman (1-5 Division II) its first regular-season win. Ogborn hit a batter to give Parker (0-7 D-III) its only baserunner to start the second inning. He struck out five Broncs.

Kingman faces Bradshaw Mountain (5-3) in its first D-II, Section V game of the season at 3:45 p.m. today in Prescott Valley.

"They threw well, and we swung the bats better today," said LWHS baseball coach James Mayfield. "We are going to need these great combinations to have success against our next three opponents: River Valley, Chino Valley and Kingman Academy. They are all good ballclubs."

Lee Williams (5-1 D-III) scored six runs in the first and eight in the third to put MALC (0-6 D-IV) behind them. The Cottrell brothers each had two hits and scored two runs for the Volunteers.

Eleven errors. That's what the Kingman Academy defense gave Flagstaff (4-2) and the Eagles capitalized for a 9-6 non-section win Tuesday in Flagstaff.

The Tigers out-hit Flagstaff 12 to seven, but it wasn't enough to overcome the 11 errors. Academy (6-3 D-III) got three hits each from T.J. Pena and Cody Quick, and both doubled once. Josh Allen and Taylor Thomson each collected two base knocks for the Tigers.

Academy blasted the Eagles with five first-inning runs, but the Eagles fought back by scoring in every inning but the sixth. J.J. Griffith took the loss for the Tigers, giving up all nine runs, though only three were earned. He gave up seven hits, three walks and struck out five in five innings of work.

MALC and Lee Williams combined for 45 hits and 32 runs Tuesday at Centennial Park, and it was the Lady Vols winning in extra innings, 17-15.

"It wasn't our best game, but we pulled out the win so I'm happy with it," said LWHS softball coach Mike Cummings.

MALC (4-2 D-IV) opened the scoring fest with a four-run first and led 7-1 into the bottom of the third when Lee Williams (6-2 D-III) began to roar back with three. The Lady Vols scored three in the fourth as well and added five more in the fifth to take the lead, 12-10.

In the seventh, MALC held a 14-12 lead but Khori Cobanovich and Rebecca LeClair both singled and scored. The game ended on a Cobanovich bases-loaded triple in the bottom of the eighth.

Kingman gets free passes from Parker

The Lady Bulldogs worked 18 walks and were hit four times en route to a 20-0 win over Parker Tuesday at KHS.

Pitcher Natalie Borgens surrendered just one hit in five innings for the Lady Bulldogs. She hit one batter and struck out seven Broncs.

Senior Natalie Collings kept Kingman from being shut out by Coconino (4-1 D-II) Tuesday at KHS, 8-1.

Collings partnered with freshman Kerissa Salmon for an 8-3 win in No. 3 doubles over Erena Clah and Deja Dayzie.