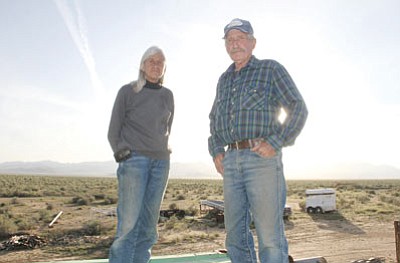 KINGMAN - Charlotte Sangick knew she'd have to live with a little dust when she made her home in the desert nearly 10 years ago, staking out a 40-acre plot of land 7 miles outside of town in the Hualapai Valley.

But she wasn't expecting the massive dust clouds that have kicked up in Red Lake and Valle Vista over the last few weeks, casting a gloomy darkness over the area like a scene out of Twilight Zone.

"These are monumental dust storms," Sangick said in a call last week to the Daily Miner complaining about farming operations in Red Lake. "It's just the volume of acreage. All the cactus has been ground into the ground. Dust was blowing on (Route) 66. People with asthma couldn't be out that day. There's going to be a lot of lawsuits. We're all breathing this in the air."

She's not the only one raising a fuss.

"It's all over Kingman right now," said Steve Tague, who lives about 5 miles north of town off Stockton Hill Road. "You can hardly see the mountains."

He filed a complaint with Arizona Department of Environmental Quality, one of about three dozen complaints the agency received over a 2½-week period in March.

"These complaints are actually for a farm entity we haven't worked with before," ADEQ investigator Mike Smith said.

This was the first the investigator had heard about Stockton Hill Farms, a trademark of New Haven, Conn.-based Red Lake Ventures LLC formed in January. Although the company has a Las Vegas mailing address, it has no connection with Kingman Farms and Las Vegas developer Jim Rhodes, Smith said.

The investigator came up from Phoenix and met with responsible parties to educate them about better farm management practices. It's important to minimize time between tillage and irrigation to prevent fugitive dust, he said.

"You can't farm without making dust," Smith said. "It's the same with farm operations anywhere in Arizona. There's going to be dust with tillage practices. Certainly there was a significant amount of dust at this location. It's really about one field they just developed.

"You're getting fugitive dust coming off one farm and it's pretty close to residents of Valle Vista. I also observed a lot of fugitive dust from Red Lake."

Linda Lara, a retired title officer living in Valle Vista, complained to the Arizona Department of Water Resources about how much water is used to irrigate four 640-sections of land owned by Red Lakes Ventures.

George Alvarez of Valle Vista is concerned about herbicides that will be sprayed on the crops.

"All the dust his tractors are stirring up and spreading all over Valle Vista community will sooner or later be filled with herbicides he will be using," Alvarez said. "His tractors are working day and night."

Alvarez would like for an ADEQ investigator to come up to Valle Vista and see first-hand the dust blowing on a windy day.

"Of course, his response might be that he can't control the wind, but then again, we would not have this issue if it wasn't for the constant plowing being done day and night," he said.

There's always dust swirling this time of year when the wind gusts more than 25 miles an hour, but nothing like this, said Toni Rashelof, who lives in Mountain Vista Ranches.

"A lot of people are having health problems because of it," she said. "People can't even leave their homes. There's a lot of concern out here with a lot of people."

Smith of ADEQ said he relies on dust complaints from the public to let him know what's going on. Stockton Hill Farms has agreed to voluntary compliance with recommendations to have systems in place to minimize time between tillage and irrigation, he said.

"Unfortunately, he got ahead of irrigation installation work and until he gets the field stabilized, there's going to be fugitive dust," Smith added. "They have stopped all their equipment until they get it watered."