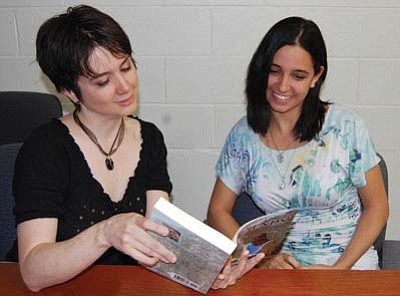 "Writing a book is a horrible, exhausting struggle, like a long bout of some painful illness. One would never undertake such a thing if one were not driven on by some demon whom one can neither resist nor understand." - George Orwell

KINGMAN - Contrary to the musings of George Orwell, writing novels was not inspired by demons for three local women who are published authors. Nor are the reasons they write novels difficult to resist or understand.

Alexandra Livingston and Stephanie Cress, both of Kingman, and Deborah Laurent, who is moving from Mohave Valley to Golden Valley this week, will explain the processes they go through when writing their stories, why they write and who they write for in this week's Kingman Area Books Are Magic - KABAM! - festival.

The women, all members of the Desert Phoenix Writer's Group in Kingman, have little in common, but what they do share is a deep love of writing, a strong fondness of reading and a powerful drive to see their writing published - with their name on the cover and their words, thousands upon thousands of them, inside.

"Writing was an outlet," said Livingston, who at 32 and with a husband and toddler at home just self-published her fifth book in 10 years geared toward young adults.

A former KABAM! featured author in 2011, Livingston said she was bullied and even beat up during her childhood in San Diego.

"I got picked on a lot. I started writing fan fiction because it made me happy and I got good at it. I wrote about characters who go through what [her readers] are going through."

From fan fiction to her fifth novel, "A Kingdom of Arie Story: Legends," Livingston said there is nothing like holding your own book in your hands.

By the way, Kingman plays a prominent role in the book, and in a decidedly intriguing manner. (See the related story for the details.)

Cress, 39, didn't start writing until her late 20s. Armed with a degree in geology, the scientist said she enjoyed writing as a teen and returned to her muse a decade later.

Like Livingston, Cress started with fan fiction, so-called because online writers focus on characters in original works, such as television shows.

"People liked it," she said. "For me, writing has been revelatory."

Cress' novel, "Gilded Shadows," published by NewLink Publishing, was primarily written for adults. The novel is the first of five in a series she is contracted to write for NewLink.

Laurent, 52, has self-published two novels with a third going through the editing process. She has done well, with more than 40,000 copies of her first novel, "The Glass Table," sold - and she's in discussions with the Hallmark Channel to produce a movie based on her second novel, "The Christmas Robe."

For Laurent, falling in love with the idea of writing novels began before she hit her teens. "It started when I was 12. I wrote a short story my mom read, and she made me promise I'd do something with it," said Laurent. "I love it."