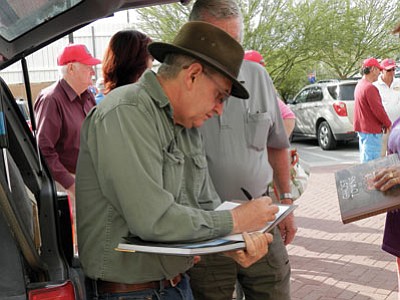 Author Jim Hinckley signs copies of “Ghost Towns of Route 66” after talking about the highway’s colorful history with a tour group from Australia. (Courtesy)

EDITOR'S NOTE: Recent reports indicating Jim Hinckley will be the grand marshal for the Andy Devine Days Parade that will occur Sept. 26 as part of the Best of the West on Route 66 festival were incorrect. That honor goes to former Mayor Les Byram and his wife, Lyndal, who were named grand marshals for last year's parade, which was rained out. Hinckley, a Kingman resident and author who has published several books on the iconic highway, has been named King of the Mother Road for the three-day weekend.

KINGMAN - Route 66 historian Jim Hinckley has been selected as King of the Mother Road for the inaugural Best of the West on Route 66 festival coming to Kingman in September.

New inductions into the Route 66 Walk of Fame will be Sept. 26.

Hinckley was raised in Kingman and has become known as a worldwide ambassador for Route 66, promoting the iconic highway in 10 books and traveling to foreign countries to speak to tourism groups.

"Our community is blessed to have him as our spokesperson at worldwide events and for tour groups who pass through Kingman," festival publicist Jamie Taylor said.

As associate editor for Cars & Parts magazine, Hinckley wrote about unsung pioneers in the American automobile industry. He received a bronze medal at the 2006 International Automotive Media Awards for "The Big Book of Car Culture."

He has chronicled the social evolution spawned by the advent of the automobile, sharing stories of Route 66 and highway signs, traffic signals and automatic transmissions, motels and gasoline pumps, and the many facets of American car culture.

The Daily Miner has quoted Hinckley in numerous articles as an authoritarian on Route 66 and what it means to Kingman.

"This thing is getting out of control," Hinckley said last year in a story about the International Route 66 Festival in Kingman. "It's like a tent revival. It's a living, breathing time capsule with an overlay of Disneyland."

Hinckley's quest to bring depth and context to the history of Route 66 has led to a photography exhibition in the Czech Republic, a lecture series and meetings with tour groups from Australia, The Netherlands, Czech Republic, Japan and Norway.

His work has been published in Hemmings Classic Car, Special Interest Autos, American Road and The White Triangle.

In his latest work, "The Illustrated Route 66 Historic Atlas," Hinckley weaves a rich and colorful tapestry that links the past, present and future of the famous highway.

For more information on the Best of the West on Route 66 festival, including vendor applications and sponsorship packages, check the website at www.bestoftheweston66.com.