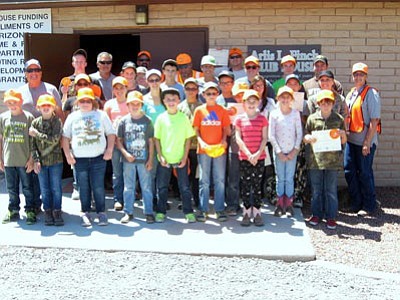 KINGMAN - The Kingman team of Hunter Education instructors are proud to announce that they have graduated 29 more students, both young and old, in recent ceremonies at the Mohave Sportsman Club's 7 Mile Hill Range.

According to chief instructor Jim Rich, the 29 graduates included eight adults (three men and five women) and 21 who were under 18 - 13 boys and eight girls - from the two-weekend class.

Rich said that a number of prizes were given out during the class awards ceremony. Taylor Agee, 9, won a pair of 10X50 binoculars donated by the Mohave Arms Collector's Association. She also won a predator hunt donated by Bob and Deanna Shaw.

Evan Hicks, 16, and his 14-year-old brother Derrick each won a pair of 10X50 binoculars courtesy of the Mohave Collectors Association, and a predator hunt with the Shaws.

Joey Catrone, 12, won the Good Student fishing trip that was donated by Striper Hunters. He then drew a name out of the hat for a pair of binoculars, and the winner was his 15-year-old brother, Patrick. Rich also noted that Joey was the top male archer in the youth division of the class.

Top honor graduate for the class was Georgia Wise, who is 11 years old. Wise won an overnight striper fishing trip for her and a parent on Lake Mead courtesy of Striper Hunters, a pair of 10X50 binoculars AND a predator hunt with the Shaws.

Rich said that Wise was also among the top archery shooters of the class.