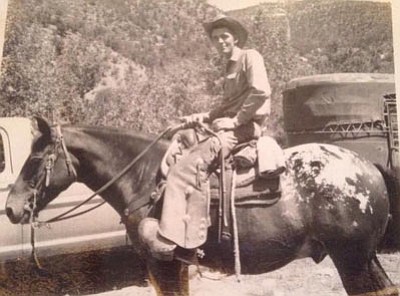 Lawrence "Larry" Mesaric was called to the great round-up in the sky Aug. 7, 2015, surrounded by his loving family and friends after a courageous 10-year battle with cancer.

He was born Sept. 16, 1939, in Harrisburg, Penn. As a young child, Larry grew up in Bisbee, Ariz., and then moved to Tucson, where he attended both Tucson and Catalina high schools. Following high school, Larry returned to Bisbee, where he began working in the Bisbee copper mines.

After his 21st birthday he and a friend decided to live the "cowboy" life and moved to Cimarron, N.M., where he began his first job as a real live cowboy at the McDaniel's ranch. It wasn't long before Larry met the love of his life, Louise Lopez (traveling 30 miles one way on horseback to court her!) and was wed on Nov. 16, 1961, in Cimarron.

One year later, in 1962, he was drafted into the U.S. Army and spent the next two years in Germany. Upon his return from the Army, Larry returned to Philmont and served as a horseman and later became the ranch's cattle foreman. Larry and Louise started their family at Philmont and soon became the proud parents of two daughters, Laura and Tracy.

In 1972, Larry and his family left the ranch and moved to Tucson, where he began his mining career with the Duval Corporation, first as a maintenance foreman and eventually as their maintenance supervisor. In 1981, he was transferred to the Mineral Park Mine here in Kingman. Larry served as the maintenance and safety supervisor, not only for Mineral Park, but other mining locations throughout the region for the company until his retirement.

Following his retirement from the mining industry, Larry continued to work in Kingman, first for Southwire as a safety supervisor and then for the Kingman School District in their maintenance department from 1997 till he was diagnosed with lung cancer in 2004.

Larry was a loving and caring husband, father, grandfather and great-grandfather. He was an avid hunter and fisherman his entire life.

One of his favorite pastimes was watching cowboy movies and reading cowboy books. Roy Rogers, of course, was top on his list. Other pastime events in his younger days were participating in rodeos and attending as a spectator in his later years.

The impact and influence he had on others cannot be expressed in words. Only those who had the honor to know him can truly appreciate the gift of him.

Larry is survived by his wife, Louise; his two daughters, Laura Mesaric Alanis and Tracy Mesaric; his son-in-law, Larry Alanis; daughter-in-law, Rosalina Browning; his granddaughters, Vanessa and Nychole Alanis and Jenna Angelini; three great-grandchildren, Makayla, Rie-Lynn and Carter; his brothers, George Mulleneix, and Richard and Mark Mesaric; numerous nieces and nephews; and his loving and constant companion, his boy, Lucky "the little dog."

Larry was preceded in death by his parents, George Mesaric and Magdalena Mulleneix; his brothers John, Jim, Mike and Billy; his two sisters, Nancy and Cathy; and his only grandson, Jon James Alanis.

There will be no funeral or memorial services. In lieu of flowers, donations can be made to the Kingman Regional Medical Center Cancer Center.